Update on the turn around behavior:

Khaleesi tries to turn me around on the trail about…. 5-8 times a ride.  It generally happens early in the ride (not after we’re headed home) and is more likely if we are bypassing a trail  that would take us toward home. Considering we ride for 12-15 miles and are out for at least 3 hours it isn’t a constant problem and except that we take 10 seconds to “have words” it doesn’t add up to a lot.

It’s not a behavior I’d like to continue- that’s for sure!

This has been going on about a month on and off and I’ve been trying different approaches. My first try was the simplest: she was pulling my hands with her head to turn around. I pulled back to stop her head. My bit is not severe and I will never be strong enough to actually win that one.

Did not work at all.

Second attempt was to give in to the turn, but keep her turning so we’d go in a 360 circle. This put us back facing down the trail and heading where I wanted to go. This did work to keep us moving down the trail, but I don’t see the behavior diminishing. She still gets to try her turn around- in the end she doesn’t get what she wants, however she hasn’t learned to stop trying.

Kind of worked, but not solving the problem.

I’m constantly thinking over what else I should try to be more effective and I went back to my 7 clinics and the concept of untracking her hind as a possible tool.

For the non-horse folks out there- I will try to explain this correctly. Untracking the hind from the front is a lot like it sounds. It disjoins the front end (feet) and back end (feet) of the horse. What you would see is the horse step her back end over so it is out of the alignment it was in with the front end. It’s a pretty basic tool and can be a safety feature (it can stop a horse who is about to get into trouble… maybe run away with you) and it can be a building block to advanced maneuvers as well. 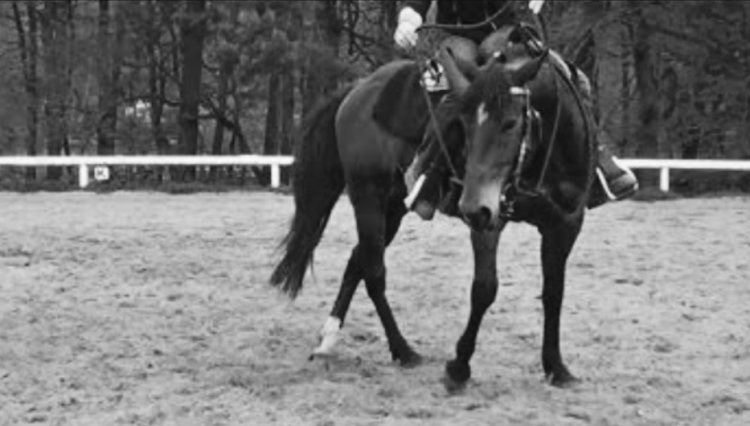 My understanding is it’s an important and basic part of a horse’s education- and I know I will continue to work on it without truly knowing why for a while.

We do work on this some, and I can reliably get Khaleesi to step over her back end away from me on the ground and I can get a pretty good step over in the saddle as well and she’ll pivot around her front quarters decently if she’s calm and paying attention.

In thinking over the turn around behavior I realized that she was turning her head and pulling my hands to turn around. Using the same hands was reacting to her. She was in control. (that was obvious to anyone who saw this in play!) Trying to control the horse from the reins and head is never truly effective. I needed to control her feet, and the hind end is where the power is. My attention was being drawn to head and forelegs because they were what was in front of me- but the back end might hold the key. It wondered if this “magic” tool of untracking her hind held some potential in my current puzzle.

My new attempt would be to catch her as soon as she started turning me around and immediately push her back end with my leg so I was working against her direction but with the hind.

She always turns me to the Left (every single time) so her hind would eventually follow the turn. Instead I would quickly put my right foot slightly behind the girth and push back on her to move her hind end against the turn while also holding her front as much as possible with my rein. Now I’d be ahead of the game by starting with the hind.

On Friday this seemed to be pretty successful. My leg pushing the hind DID work to at first keep her in place and then in keeping pressure there and not giving in would turn her back in toward the direction we were headed so she wasn’t successful at turning around.

At first it was messy and I won’t say I actually DID untrack the hindquarters but I stopped them from following the circle she attempted to make. As the ride went on and she tried a few more times we eventually got smoother and she would actually step over behind and not even come close to getting that turn started.

I was not ahead of her game instead of reacting.

I think this might be our answer to decreasing the behavior because I’m shutting it down before she can make the turn. In effect I’m closing that door to her as an option.

Khaleesi: can I turn us around to go home? I don’t really want to work today. This is boring… Faygo is walking too fast all the time- what is her problem. We rode this trail last week why do you keep wanting to do this?

Me: what? No. What are you doing? A circle? Seriously? KHALEESI !! Ok get back on the trail and let’s catch up with faygo!

I meant to have Susan get some pictures of us in action- but part of the training was she and Faygo moving on without us (no horse likes to be left behind) so the time she wasted in circles didn’t stop the forward momentum of the ride.

If any of you have had this training issue and have other thoughts- I always welcome them!! 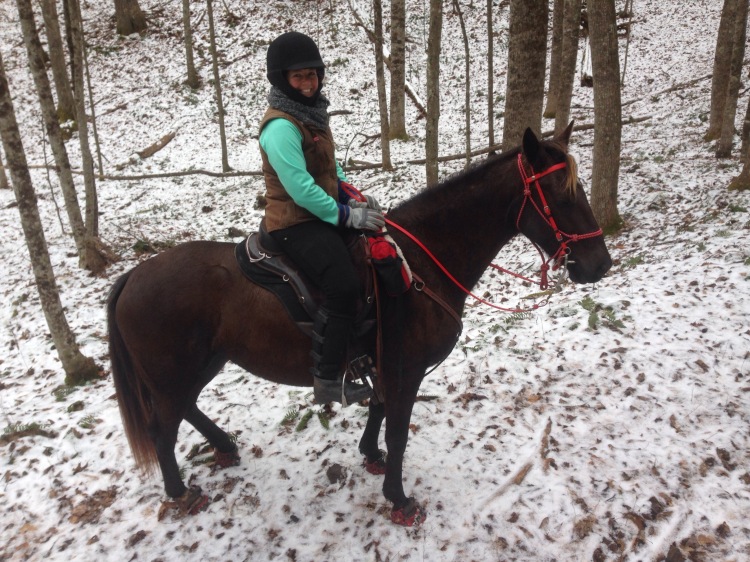