When you say nothing at all.

All the great horsemen (and women) seem to agree that the language of equus is a language of gestures and body movements. I’ve known this a long time- at least since I was inspired by Monty Roberts to try to work with my new young horse and looked to him as an example of how to do this ‘right’ from the start.

So why do I talk so much to my horses?

Sometimes the talking is for me: I sing when I am worried to calm my adrenaline and breathing which then reassures my horse. Sometimes talking helps direct me and keep me focused on what I’m trying to accomplish.

Sometimes the talking is for other people in riding/working with: I talk so they know what I’m doing.

Mostly: I talk because I’m a human- and a chatty one at that – and love to communicate.

Does this chatter get in the way of really communicating with my horse?

I took an experimental ‘vow of silence’ for about 90 minutes the other day to really watch my horses and learn a little from them, but also to try to NOT TALK at them and see what happened.

This wasn’t entirely groundbreaking. They ate, they visited with me, went back to eating again. There was one moment though that stood out.

Khaleesi was eating grass a ways off. I stopped what I was doing (some shed clean up though I was more intent on the horses and the clean up was just a task to do in between) and watched her, leaned relaxed against the shed wall.

After a short time she picked her head up and locked eyes with me. I just stayed there and met her gaze. Kept my body language relaxed and my eyes on hers but soft. For a minute.

Then without taking one more bite she began to come toward me- in arcs (not straight on) but definitely with purpose.

She came all the way up to me and I held out my hand (palm down) and she sniffed it, then gave me her neck to rub.

There was communication and energy in that interaction as clearly (actually more clearly) as if I’d called to her to come. I hadn’t said a word.

Mark Rashid says that Everything a horse does gives you information. (Highly recommend his book Whole Heart, Whole Horse) It’s not good and bad behavior, it’s a horse communicating something. I’m curious now about what they are communicating – all the time!! And I’m wondering if my chatter is getting in the way of that process.

I was completely embarrassed by one example of this just yesterday. Keep in mind that I was already aware and paying attention to my human chatter and trying to ‘speak’ my horses language first.

Susan and I were riding on a pretty early spring day on hunting roads that had great footing with the intent of making good time as safely possible to practice picking up speed and increase their cardio workout.

With faster speed comes more ‘racing’ behavior between my two mares and those are the times Khaleesi threatens to kick Faygo if she passes us.

The precursor to this is trail hogging (you can’t pass if I’m blocking you!). I discourage trail hogging- but Khaleesi is still learning that. I’ll ask her to move over and we are getting better at that every ride- however it is a constant conversation we have right now.

One such moment when she moved to the center to cut off Faygo I said out loud to her in human English:

“Nope, you have to move back over.”

Not only did I know that phrase would not encourage her to act, I noticed that while I was SAYING it, I was in fact not ‘speaking’ the only language she would understand which is my leg pressure to her side. In this case the chatter wasn’t just harmless- it had gotten in the way of me effectively communicating to my horse the information in her language.

Of course I pushed her with my leg next – but the chatter cost me time. I was frankly shocked. I would have told you I do them at the same time – and I know my human chatter was for Susan’s benefit. I wanted her to know I was trying to stay on my side of the road but struggling keeping my horse there.

So in that case was the chatter helpful or even benign?

What would have helped Susan and Khaleesi would have been for me to shut my mouth and put leg on my horse.

I am certain some talking is ok. I will not be taking an equine vow of silence and turn my barn time into a monastary environment (although Carrington… That makes me think of a little business venture with these vow of silence camps springing up…..) but cutting back on the chatter I believe is helpful to being more effective.

The question I will be working with going forward if I am asking something of my horse is:

Can I say it to my horse in her language instead of resorting to mine first?

Some people are convinced that horses know some word commands (especially canter, or walk or whoa) and while I am not a scientist and can’t really argue this, I would ask if it’s truly the word or a subtle (or major!) change in the human’s energy or body position that makes the true change?

Can you really say whoa but not stop your body or energy and expect your horse to stop? I believe that would be a serious mixed message that the body/energy would win out, which tells me it’s more the body/energy than the word that matters.

I think an example where this doesn’t apply is in calming a horse. My equine dentist said that no matter what he does to reassure a worried horse, when clients (owner) talk soothingly to them they calm down better. I’ve also found at vet checks that calm breathing and calm talking while gently stroking her neck can help get her heart rate to drop. I also agree with Susan who suggested that horses know the sound of their owner’s voice.

And I doubt I will ever give up telling my horse as I rub her what a great horse she is and what a good job she is doing.

But I will be trying to cut down on asking verbally- instead trying to sort out what my body is saying and how effective I am being at asking for things more clearly in her language. For me the verbal language is watering down my attention on the physical at times and I want to get better at this. 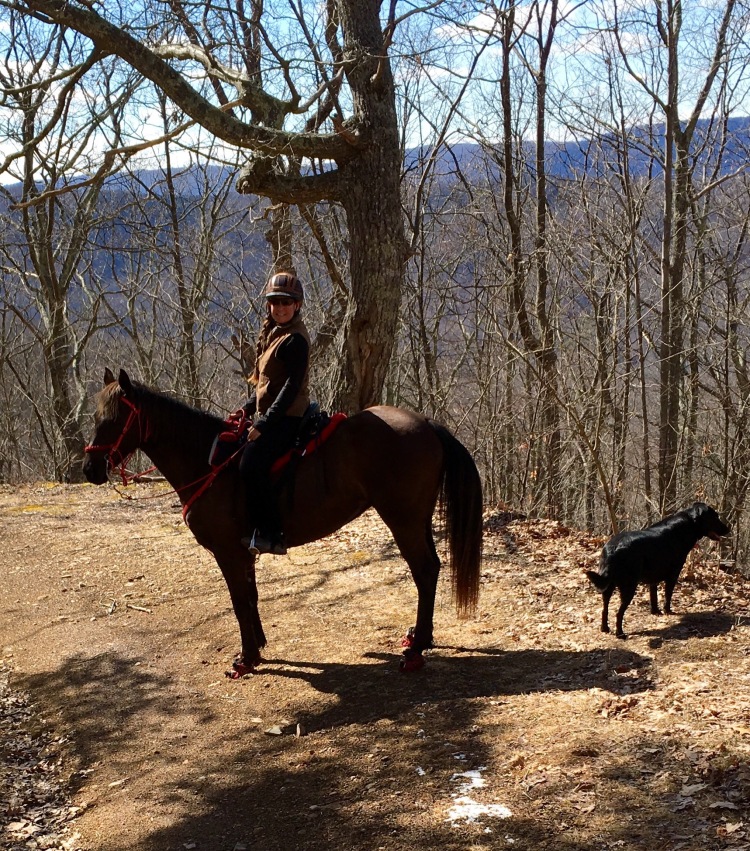 As for first ride of the season countdown, we are in good shape! And with a faster pace yesterday I can report some positive training/conditioning notes:

#2- lots of passing each other at higher speeds and though she had the mare attitude there was no attempt to kick.

It’s been fun to get a few mild weather rides in with friends lately. I’m definitely looking forward to some warmer temps appearing and trails drying out more and the countdown to shoes this week!