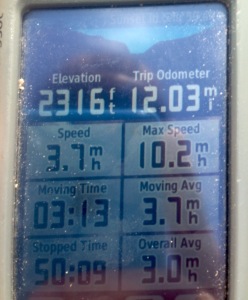 Khaleesi went on her third “long ride” with the girl gang on Friday. We did a one-way, 12 mile ride, dropped off by a horse husband (not mine 🙂 ) and ending back at their barn. I went to pick her up in our field and she loaded within a couple minutes. Then when we all piled into the three horse trailer for the drop off she was the last one on and she walked right up like she was ready for adventure.

It was a beautiful ride and we saw flame azaleas, mountain laurel, and rhododendron all blooming on the same day (I’ve never seen that before). We were all ready to work on Khaleesi’s kicking habit. We didn’t. There wasn’t one kick attempt. We rode three across on the larger roads, she rode front, middle and behind. Not one kick out. I’m not ready to say she’s “cured” of that yet, but it was good that she seems to be getting the idea that it’s not allowed.

Video of the laurel:

One issue we did have a few times was in the front of the group about 2/3 of the way through she would stop and refuse to go forward. She would back off the trail (in open areas) almost like she wanted another horse to take the lead. I had to pull a switch from a tree branch and pop her butt to make her move out again about three different times. I don’t know what caused it, she didn’t pitch a serious fit or rear up, but she definitely tried me to get her way.

I made her get up there in front after she refused but after a while we would let another horse lead and she seemed to have plenty of energy left- so I don’t think she was tired. (We’d also stopped twice for a decent grass and snack break).

There were two instances we had to crash through woods to detour around large trees that were down (too large to hand saw). The first one I did some clipping, sawing and clearing of smaller debris and walked her with me as I went- she was easy. The second was rougher- the down was too big to jump because it was on a steep downhill and the landing side was significantly lower than the “up” side. Unfortunately the area around the down was thick, branchy, and steep in both directions. Khaleesi and I were in front and we decided to pick our way above (the limbs on the below side looked too sketchy to me) but our other two friends opted for the lower route. I navigated on foot over rocks and through rhododendron/laurel and over small downs up the side of the mountain and Khaleesi just followed behind occasionally grabbing a leaf from a tree as we slowly made our way. (Eating tells me she’s not very concerned or nervous) She had been great before following me through the roughs, but this time her friends went out of sight the other direction and were not coming along. I wondered if she would get panicked. She couldn’t have cared less. My solid, steady older mare Faygo would never have been so good on that detour. Even through she is experienced, she hates bushwhacking through rough territory and gets frustrated and I have to watch she doesn’t step on me- or get free and leave me there! 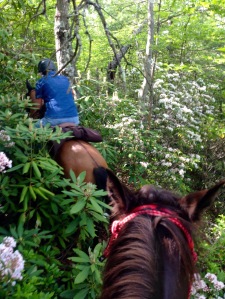 When we finally made it back to the trail she could hear the other horses and told me she’d like to re-join them, but we were completely under control. I think this says that she trusts me, and she sees me as her #1 herd mate. That is really rewarding to know!

Last issue we had at the tail end of the ride was our boots twisting! I had to hop off to readjust them and one of the rear boots actually cut into her coronet band right above the hoof. I remove that boot completely and reset the others for the rest of the ride. By the time we were walking into the barn we noticed she had no back boots on, meaning one was left somewhere on trail. No time to go back searching right then.

Thankfully the boots are dragon fire red, and on Sunday, Nancy and I went to find the boot and for a quick ride I went with her on her big TN Walking horse, Ace. It was a fun ride and we found the boot easily on trail. It’s recovered and I hope to customize the back boots as suggested on the renegade website. My farrier is coming this week and we’ll do it together- this should help them fit more securely without twisting on the back feet (her feet are more narrow on the back).

This week looks like a ton of rain and it’s my last full week of teaching before summer- so we might have less riding opportunities, but we’re on track for a great summer and lots of miles on my 100-mile-horse!