Always offer the horse a good deal first. Then if they don’t take it do what it takes to get it done. If you’re consistent the will start to take you up on the good deal and you’ll need less effort each try.

**Every detail counts: I try to be more aware of all my interactions from walking over to the pasture to tacking up. I have a different way of approaching and putting on the rope halter now that asks them to participate and I ask new riders who come to try the same things because they are important to me. It treats the horses as partners from the first contact and considers them as beings from the start.

Each step to the barn is part of the dance and we do different speeds, back ups and even throw in a circle sometimes to partner with them and engage their minds with us before we ride.

I usually allow them to eat while grooming and give them some leeway there- but in tacking up I don’t want too much dancing or ear pinning while girthing etc and I insist we tighten slowly in between other movements (putting on a breast collar or adjusting stirrup length, checking feet or putting on boots, grabbing a water bottle etc…) so it’s not so harsh all at once.

When I bit I now insist they lower their head even a teeny bit and participate and I’m much more careful to not bop them in the face with my bridle and gently adjust their ears. Also I’ve lowered my bits so we have NO WRINKLES anymore. I never understood the common wisdom of the wrinkles and after hearing Buck say “That small amount of contact means something to my horse” I thought that makes so much more sense to me, I will try it. I think my horses are softer and happier with NO WRINKLES at their mouth. We certainly haven’t lost any control.

When we go to mount I prefer to use the stool- it’s easier on their backs and I want them to learn to come to me and stand so I can easily get on. We are never in such a hurry to get on the trail that we can’t take as long as we need to be sure the horse learns right where she needs to be for us and reward them with stillness and a rub first.

Once mounted STAND STILL until I say we can move. This is my current challenge with Khaleesi- she walks at least a step or two and then stops at which point she will stand still, but we’re forming a habit of a few steps first. I need to get off of her and start over when she does this but I’ve been lazy in it and just ask her to step back and stand- which she will do.

GOAL: work on getting on and NOT MOVING feet until I say it’s ok. Preferably on a day no one is waiting for me to hit the trail! 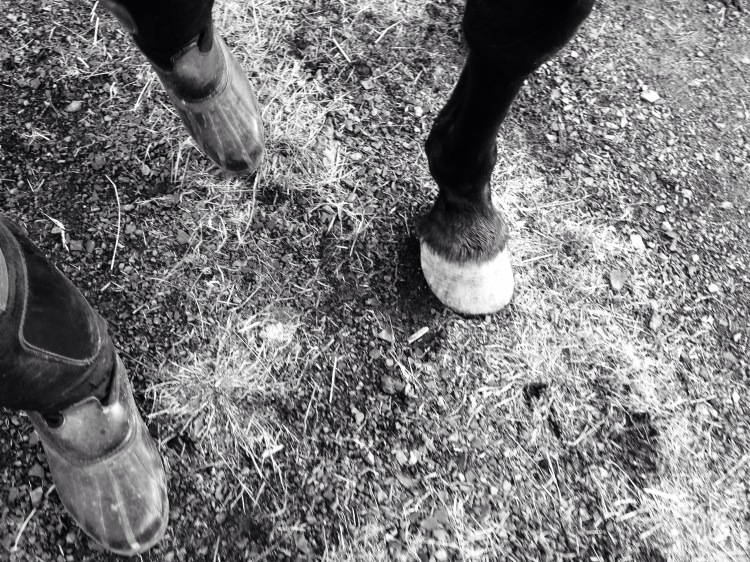 **Leading Dance: Forward all speeds and directions is great. We’re still working on the back up with me next to her (leading). At first I had to ask her with the lead every time. Now she’ll at least take one step on her own. I want more, as many steps as I want, so now that she’s begun to get the idea I am trying to get a couple steps. I sometimes forget to release her as she’s backing and I hold the lead too long during the process which isn’t as clear and might be a reason why this process has been slower than cleaning up the forward motion.

GOAL: release AS SOON as she’s started backing with me and see if she’ll continue with me before adding pressure again. 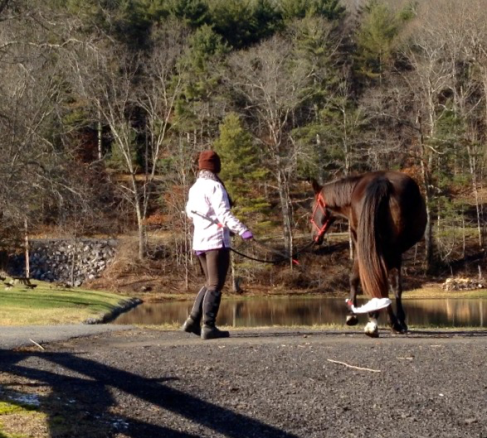 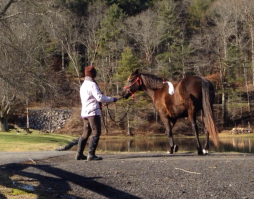 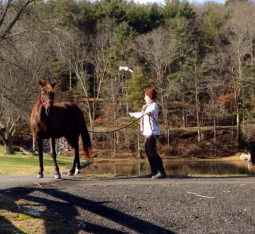 **Walking circles: The fundamental issue with my walking circles is starting and turning. She does not know what it means to send her off with my lead rope. Once we’re moving in a circle she’s pretty good. I need to grab a longer line to get some distance, but she’s not collapsing in so much and she “gets it” now and moves around me and stays out of my bubble after we’ve gotten going.

GOAL: work on sending her each direction away from me with my lead rope. As Buck says the lead rope ought to mean something to the horse – it’s not just a leash to keep her from walking off.

**Forward Walk: We took a walking only trail ride with a local teenage horse girl and worked on JUST a little faster if she bogged down. Staying in front was helpful for this exercise because it wasn’t to keep up with the pack but just to move out. We sometimes had the big walk, and sometimes just a decent stride, but I never settled for the death plod and she only tried to trot out once- so she’s picking up a little speed for me and seems to understand. I have to remember to offer the “good deal” here as if she gets ploddy I start to assume she needs a kick to ask her to step it up. I assume a small squeeze won’t do the job- and if I don’t start with that it never will.

GOAL: continue to ask for better walk a few steps at a time. Always remember to squeeze with both legs just a touch before getting to a kick, and start insisting she keep up the pace longer each time. 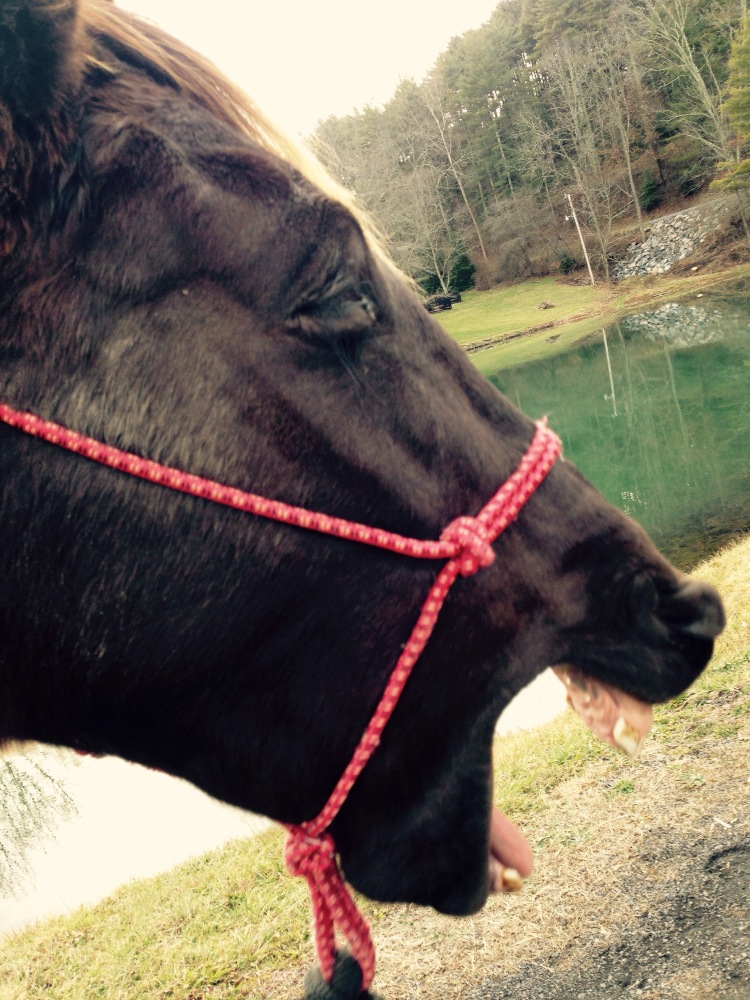 **Basics & Manners: On our ride today she kicked at Faygo (for the first time in months). The first time I was taken aback and not ready so I had to lose the opportunity to bad timing. I wasn’t even sure that’s what happened and I had to ask Susan… did Khaleesi just kick Faygo??  At that point it was way too late.

Fortunately a few minutes later Faygo approached us again and I was ready when strike two came!

I immediately and calmly one-rein turned her and started working in tight circles then small figure 8s disconnecting her hind quarters and moving around in a small space. She eventually softened to the work and I knew we had succesfully  communicated.

Susan asked me what I had done and why. I did a rough explanation at the time of making her work and move her feet, but in writing my blog (the main reason I do this) I thought it through more and realized that in choosing not to yell at her, or hit her in any way with my hand or my popper (all things I’ve heard of as ideas to correcting a kicker), I took control of her feet and I demanded she stop doing what she wanted (walk on toward home) and instead do what I wanted (go in small circles in one place on the trail). I continued this with her until it wasn’t a fight but until I felt her body soften and give to me and what this ended up doing was remind her that I was the one who makes these decisions when I’m riding her and she needs to “give” to me.

Kicking a horse on the trail is a manifestation of her taking control of a situation she wasn’t happy about (Faygo coming up to pass her). When she kicked she was asking a question:

Is it ok for me to kick Faygo for passing us when I want to be in front.

Unfortunately the first time it happened I said:

Yes, sure go ahead and kick Faygo.

I do not believe that 15 seconds after the fact me reacting would have had the same effect as when I did it immediately.

In some ways I loved the fact that me missing the first time did exactly what one should expect. The concept that you are always teaching your horse something in every interaction was never more vivid to me than that moment.

You have the choice- instill good habits, or instill not so good ones.

Every inch we give because we are not paying attention (like me today at kick 1) or because it’s just easier, will train the horse to invade space, not stand still when you mount, not pay attention when you need her to.

Conversely every tiny inch you ask for something to keep their attention or insist they stand quietly while you chat, fix your gloves or get off to adjust your saddle, or to back up while leading just for the heck of it, is an inch or more closer to your goal of having a horse who is a pleasure to spend time with, in tune to you, and most important: under control when you need it most. 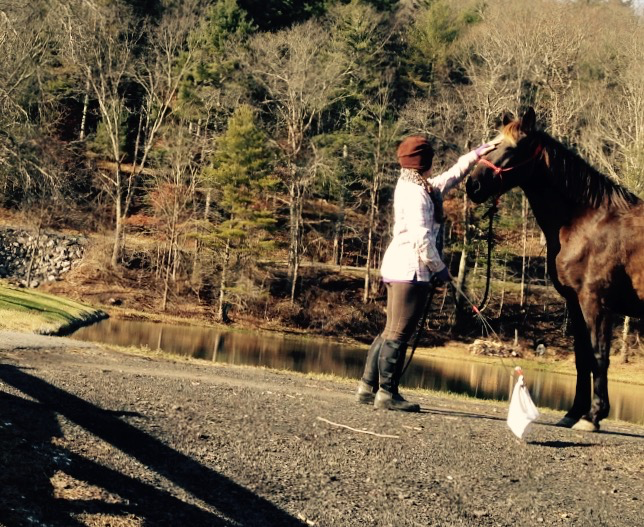 Fine Tuning: I’d like to start with some serpentines around trees in open woods to get her from having trail blinders and staying connected with me. Also to help me continue to get her legs operating as if they were mine. Keeping an independent seat and working around trees with my legs and eyes can really “up” our game.

GOAL: take an “alone day” to go up into the woods and instead of a true trail ride, spend an hour serpentining around trees in the woods!

I’ve been thinking more and more about the concept of giving the horse a “good deal” first. Every time. Allow them the chance to take the good deal and if they don’t- do what it takes to get it done.

The “good deal” is the most gentle way of asking for something. Every time assume your horse will take the good deal- even if she never has yet.

We can get used to assuming our horse won’t do whatever it is without a big loud bossy command and we skip the good deal altogether. The horse might have made a mistake the day before- but the horse moves forward the next day as a new day. It becomes reaction instead of thoughtful. We should avoid saying “my horse always does xxxx” because we’ve put that behavior on them now and assumed they can’t learn and change. We’ve now blocked the process of growth for them and us.

I thought about this in life too. We can have difficult relationships and we “know how that person is” and we “know what we need to do” to get something done or work around them. We react instead of thoughtfully proceed. This is more likely at work or with a family member because you wouldn’t normally keep a friend around that was difficult to be around.

Shouldn’t we always hope the best and give people a chance to each day to take the “good deal” first- before we get bossy or loud or go around them? It may not always work- but it’s a better process to at least start with a quiet and gentle yet direct request than passive aggressive maneuverings, bossy words or a tough attitude.

I know in my life it’s a good reminder.

As for my horse- the teenage phase hasn’t been so bad lately. Probably I’m doing a better job communicating with her and I love that after we work she has softness in her eyes and her body and a calm that tells me we did good today.

We all learn more when we can lower the stress level- horses and humans both. 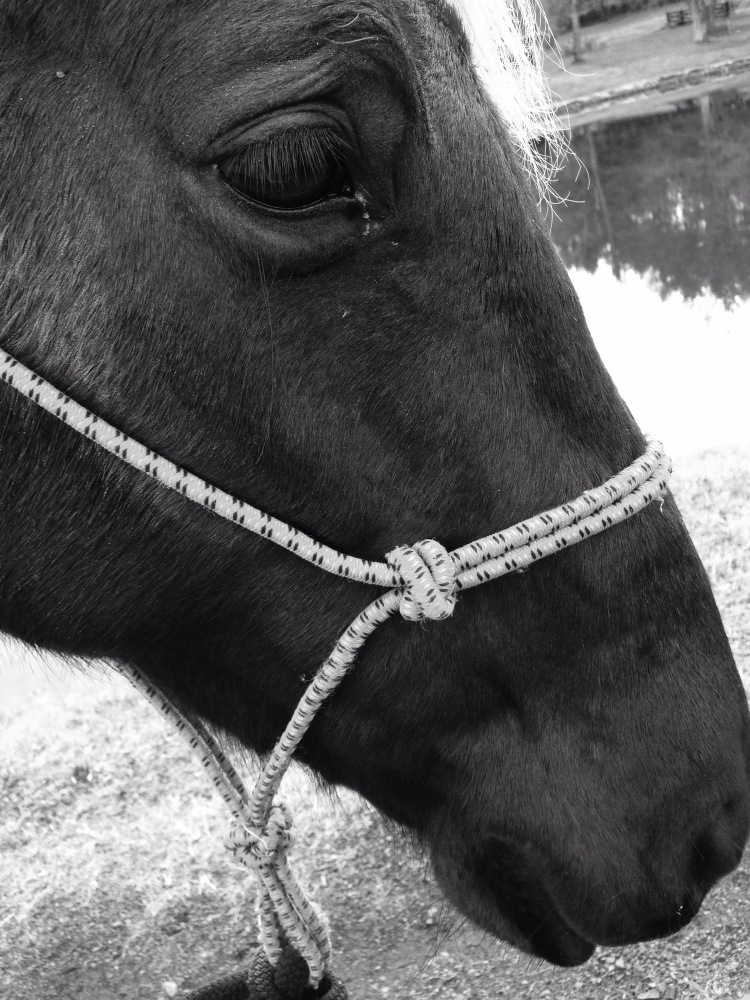