I haven't written recently not because my mind is blank or because I haven't been active with my horses.

I just don't know what exactly to say.

So in discussion with the 4am voices in my head that often turn into a blog post all I could think was I might as well start with that.

I don't know what to say. I'm not sure where to begin.

On the scale is the crazy amount of work that presents itself at the beginning of a new school year… that I have a lot of music to learn… that it's a hard time for me to put in added expense (especially with the mileage there and back – a long haul)… there's still the fact that I don't have reliable back boots (still waiting since June on the Scoot folks to release the slims)… I'm rebuilding my horse from the inside out and ground up- literally– this summer… and I just went through another mind-blowing clinic that has my head still reeling about how to proceed with my horses that could take a little time for me to settle into.

But trail miles are a positive thing for both me and her. Our partnership has been formed around competing (I use that term loosely) in endurance rides and she likes it. She understands the trail. We have a great job! And as long as it's possible while rebuilding we need to keep working together. On the trails and in endurance!

As long as it's possible.

Yesterday when doing some arena work she was off at the trot on the grass. It's hoof sensitivity from the massive changes that are in progress. She may be starting an abscess… either way.

She may be ok in boots and pads- I would trail ride her that way around here bailing out and going home if she presented issues- but I'm not hauling her to TN compromised. Not even a question.

No BSF for us this year.

When I consider the decision I'd been wavering with I found some interesting self-reflection about myself.

I consider myself one who doesn't care about what others think of me. I try to decide what is right and move forward and if others don't understand that is not
my business .

But this decision was harder for me because I felt this imagined pressure to get out there and ride my horse (in events). No one is doing this to me. It's the voices in my head.

I have a mare whose gone through a successful season of 50 mile rides. We even attempted a 100… what happened? What on Earth am I doing? I imagine it looks from the outside I've gone off course.

She had things working and now they're falling apart… where did she go wrong? Why couldn't she just stick with what was working?

Thing is it was working …. kind of… but I knew we were capable of better. I have this vision of what I want my endurance horse to look like and the direction I was going wasn't improving it was weakening.

I believe the directions I'm headed will build a better horse and a better team, however, it turns out in the re-building stage sometimes fixing problems for the future costs something from the present.

I find myself in the 4am conversations hearing my gut say: You're on the right track. You know it deep down. Have faith and stay the course.

It will be worth it in the end. 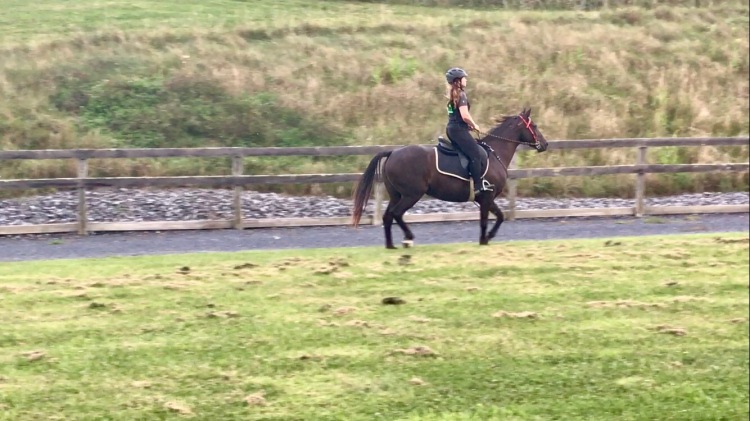 I'm thrilled with the improvements coming from changing to a Balance Saddle. I didn't have any issues with my Phoenix Rising saddle. It fit her, not a touch of back soreness, gave support yet ability to move and I would highly recommend one as a consideration to anyone searching. I will probably always keep one on hand because it's a fabulous saddle. However when I heard about the concept of constructive saddling vs. traditional saddles it struck a chord with me.

The muscling that's developed in just a month of riding in this saddle is astounding to me. Also- she wasn't exactly difficult to saddle before but she is a dream now. She stands relaxed and calm and I can saddle her with the rope draped around my arm loosely and she won't move a hoof. She loves it.

This decision to go from acceptable to inspiring is a small view of what I envision is possible with this mare if I provide her with optimum instead of adequate.

There's a saying: if it ain't broke… but what if all I ever knew was slightly substandard… would I even recognize broke?

I also made a nutrition switch that I've been publicly quiet about. I took her off any grain, pellet or balancer as of end of April. I have her on forage of course which in VA I am blessed with in spades – and she gets coolstance and some free choice minerals to supplement her that can be mixed in food but I find she eats it free choice as she needs. I took this advice from some people who have a long history of incredibly healthy horses that look fantastic and are high level performing… over many years.

I am watching carefully to see the affects- and after 4 months her coat and hair look the best I've seen and after years of my farrier letting me know that her hooves grow slowly on the scale of his experience (even with a year of extra biotin supplementing) – her hooves have been growing faster this summer (also since I pulled her shoes) than I've ever seen. So far I like what I see overall.

As for her feet- that's my biggest hang up in the process. I've had a trusted second opinion say that the trim from my hoof school day is well on its way to better hoof health but it isn't there yet. These changes take time as the hoof gets shaped and regrows. This is one reason I had to take the best part of riding season to do this- it's when the hoof is really growing.

It's taken a couple months to get here and there's still a ways to go- but now that I'm becoming more educated about what the angles mean and what that does gradually over a lifetime of stress on the suspensory system in the legs it's important to me to get this sorted out now and as quickly as she can handle so we can have a long career without issues ten year from now over it.

Endurance has definitely helped educate me about the feet, shape, angles etc because it is so important to that community over so many miles. Many endurance riders I know do a lot of their own hoof care because they know so much about it from having to!

Meanwhile to get these changes moving quickly I have been getting as much as I can done without crippling her and then continuing the process so she has some sensitivity on and off – it is in the hooves.

She's just not ready yet and was perfectly clear about it to me.

On another note I am inspired after the weekend clinic to continue to improve my communication and relationship. What I noticed is that she fills in for me. She helps me out a lot. But as I'm working on myself and getting better- she is starting to demand I take on more and she fills in less.

It's been fascinating to watch that shift and it's wonderful and a little scary at the same time. My horse is asking me to step up my game. She deserves a better and more knowledgeable leader so I'm doing my best to take on the challenge.

The horses are the best teachers.

It's caused me to rethink some of the things I do or the way I do them and that is tiring and time consuming in itself.

That is my part of the re-building process. Exciting and exhausting!

So as for Big South Fork… it's sadly just not going to happen this year.

Endurance riding is our work together and horses need and love to have a job. I'm not backing away from the sport I love and am challenged by. I'm not going to disappear into a fenced in green arena obsessively building 10m circles and working on better side passes…

I'll be back as soon as this re-building process allows and hopefully that means Fort Valley in October.

Some of the non-physical things I'm learning and working are getting more difficult to talk about in this kind of setting… and quite honestly some of it I just don't understand well enough to even try.

But I'm still here and I'll keep you updated best I can as the journey which I wondered last spring if a chapter might be closing (attempting my first 100) is actually in many ways barely begun.

The headline photo at the top of the post was taken after I'd spent 45 minutes in the field communicating with K in a way I hadn't taken the time to previously doing a couple very simple things (including approach and halter). When I walked away she followed at a distance shaking her head occasionally and watching me. She stood there a good while before walking off to eat. It was the way she watched me that day that caught me as different. I lightened the photo below to make it a little easier to see her posture, ears and eyes….