As I said in my last post… Winter is coming.

But apparently not quite yet.

I asked my husband one particularly warm late September day… do you think this is Indian Summer?

No. This is just still summer.

Now we are in November- have had frosty cold nights, some days with highs barely reaching 50, and areas around us have had a snow flurry or two. Dogs and horses have begun to get wooly. Yet this past week we had sunny days with highs in the upper 70s.

Oh.. THIS is Indian Summer! After feeling too hot in long sleeves, by Friday I am back in my summer ice-fill tights and a t-shirt. If my horses weren’t struggling- unable to take their newest protective layer off it would be a joyful celebration of one last chance to feel warm in the sun. Faygo is miserable, and Khaleesi just doesn’t seem right.

We rode Tuesday and my friend’s horse hasn’t been kept in great shape this season and he is normally in shoes- but they’d been pulled for the winter so we planned to take it easy. That wasn’t hard- her horse was still leaving Khleesi behind. I found it odd that it was so hard to keep her moving at a good pace.

Maybe she read my last post and is trying to challenge my new goals… make things just a little harder for me. Sometimes I wonder if she can read! They are hiding an iPad out there somewhere I’m sure of it!

I chalked it up to a warm day, and that everyone is off once in a while.

We rode again Friday with temps back up in the 70s and Faygo came along too- so again- we’d planned to take it easy. Yet again Faygo with heaves and substantial winter coat growing in… Levi with no shoes and the least conditioned… were leaving us in the dust.

At one point I let her walk as the others gaited/trotted a part of trail on out of sight to see what she would do. We were on our way home (she’s not seriously barn sour, but she does pick up a little on the way home), and she doesn’t generally like the herd to get out of her sight. She continued at her walk until a few minutes later we caught up to them waiting on us wondering where we were. She was breathing the easiest and sweating the least (though she did sweat under her pad and in a few spots- so she didn’t appear to have an issue with Anhidrosis). The other two were wet entirely with sweat. She is the youngest and most conditioned this year in that trio. I then tried pushing her forward and used my leather popper to get her moving… she did… but I knew she didn’t feel it. 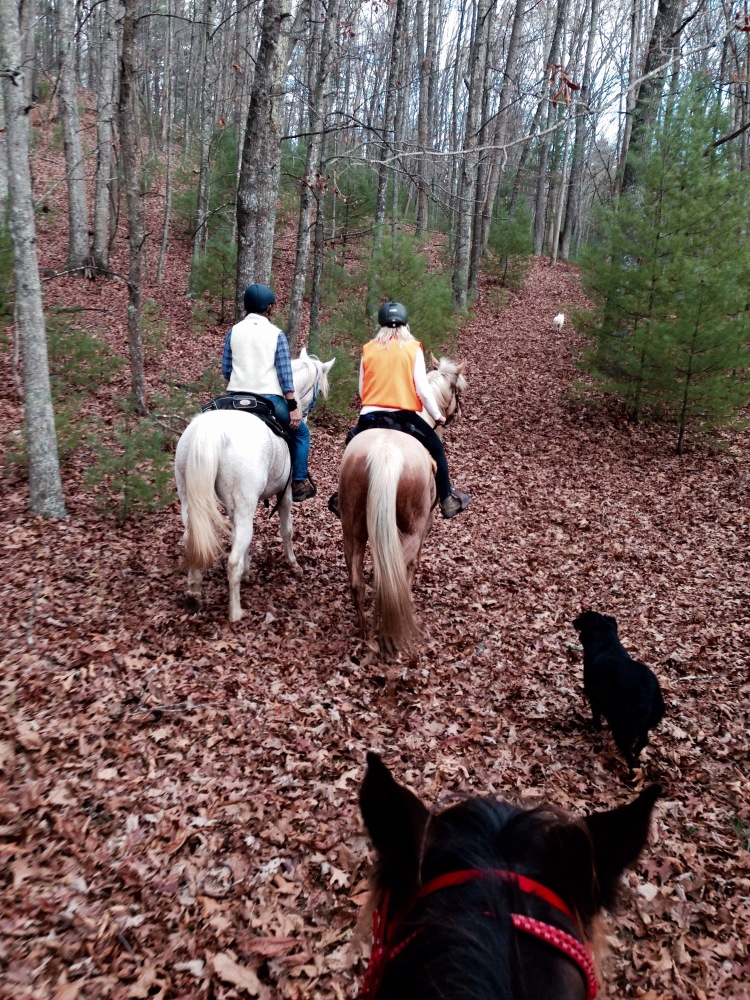 Was she sick? Was it the saddle?

Back at the barn I took her temperature. Good horse owners take their horses temperature on occasion and establish a normal base line.

I had not been doing that.

Not high enough for me to call a vet yet. [also I read somewhere that digital thermometers can be slightly off]. We had just come in from a hot ride. She didn’t seem lethargic in general. I decided to check in on her the next day and see if it was more normal. But also I had gone back this week to riding in her wintec saddle with better pads to help offset the hard spot. There were once again dry places on her back and she might have been uncomfortable and that’s why she was not moving well.

In the end it became clear the choice for us was going to be the Imus (Phoenix Rising) saddle that I so love to ride Faygo in.

The owner of the company has gone above and beyond to work with me both on price as a returning customer and slight customizations to make the saddle slightly better for us. The saddle will have a lower profile pommel, english style leathers instead of the bulky fenders, and she is moving the place the leathers attach more underneath my seat for posting (the normal Imus saddle is set up for gaiting horses with your feet slightly in front of your seat). The stirrups are free swinging which is a nice feature and you can really put your legs wherever you need them- but in the Imus saddles I rode in I ended up posting into the pommel as I balanced above the stirrups too far forward. They are going to discount slightly more not to send me their standard stirrups (which are comfortable, but leather wrapped and heavier than the lightweight composite stirrups I plan to use instead).

The saddle is on order! But it will not arrive until mid-December. So for now I’m making due with whatever I can.

I thought with a good enough pad the wintec would be ok for some short rides, but now I’m not so sure. From some research I believe the CAIR system has failed (which can happen after some years of use- normal saddles often need to be reflocked, so it’s not out of the question to assume these panels also might need attention over time) and where the two “balloon” sections meet is right under the seat where my hard spots are. I think that seam/connection is what is causing the problem and possibly the more riding I do it in, the more deflated and pronounced the bad spot will get. I hope to get the CAIR system removed and have it wool flocked this year so I can use it for our lessons next summer. I would also consider a new CAIR system if that were cheaper/easier. I think with light use it would probably last us a while.

Saturday I brought the girls in to check them over and Khaleesi’s temperature was 99.8. A tad low, but within a normal range (horses can range from 99-101F). I plan to take it again today and see what it is.

Today the high is expected to return to the cool 50s. I am going to switch saddles and have a new riding friend coming up from the land of the hunt and eventing to ride our mountain trails. I will be curious to see if Khaleesi becomes her usual self again or if I need to dig a little deeper into why she seems to be in a funk.

I had a visit yesterday from Susan who also works in my building at Washington & Lee (I teach violin and chamber music there). We had a chat on Wednesday that ended with us learning we both ride- she was intrigued about endurance riding (she hunts & does eventing and has never really gone on a trail ride in the mountains) so I invited her up Sunday. She is a really nice rider who enjoyed Faygo and what fun to introduce someone to the beauty of trail riding!

She had never crossed a river before (we did that twice- not including all the small streams we pass). Khaleesi and I opened almost all the gates and closed them without dismounting and she was quite impressed. We went off trail for a segment that I prefer where the trail is steep and often washed out and rode through the open woods “obstacle course.” We rode the horses through two sets of cows each having young bulls romping about without incident. We took the dogs along too (of course!). She thought the woods and trails were beautiful and said she’d never done anything like it before and fell in love. She promised to come back anytime she could!

I went back to my paragon saddle (the english style gaited trail saddle that works pretty well for her, but is harder for me to post balanced in). It was also a cooler morning. Khaleesi was much more back to herself and though the girls meandered a bit in the first mile they picked up their game and we did mostly trot/gait canter through the ride. She was comfortable at any pace even though Faygo’s saddle stirrups don’t have enough holes for shorter legs (her feet would come out when we cantered!). I actually fixed that by adding a hole when we got back in hopes she will return soon!

As for the saddle, the paragon left a few dry spots still, but I’m going to try a better pad and see if it helps. So far no soreness has developed and she seemed to move better in it. Now that I’m getting more confident in my riding I seem to do a little better in it than I did earlier in the season. I think it’s going to work as I need it to until the Phoenix arrives next month.

And for the last bit of exciting news… Team Green has officially moved into our new barn!

It’s not a big move as we spent last winter here, and have been squatting there since late summer. Most of the pictures of us around the barn, or in the field are taken from here. It is just next door to our old place and belongs to a good friend who I ride with whenever she’s here. Now we’ve made it official and are very happy in our new digs- we have our own room and love the space. It’s a beautiful barn, well equipped with anything you would need. The girls are happy there and have a run in shed and really nice field. The barn is large and provides indoor space for vet and farrier visits especially important for the cold seasons when there is inclement weather. We are grateful to call it our home base!