I arrived at the barn hoping for two things.

#1 that Khaleesi wasn’t lame or off from her kicking/slipping episode.

#2 that she wouldn’t walk away from me to show she was looking for that ever elusive relationship ‘space’ when things aren’t going so well.

When I pulled in the girls were about half way down the field perusing for any grass that might have popped up.

When I finished making their lunch and walked out (when I’d usually see them waiting at the gate) they were now 3/4 of the way down the field.

However as I walked toward their field they decided to mosey slowly toward me and the gate.

Maybe it’s not so bad as all that… She seems to be coming in. 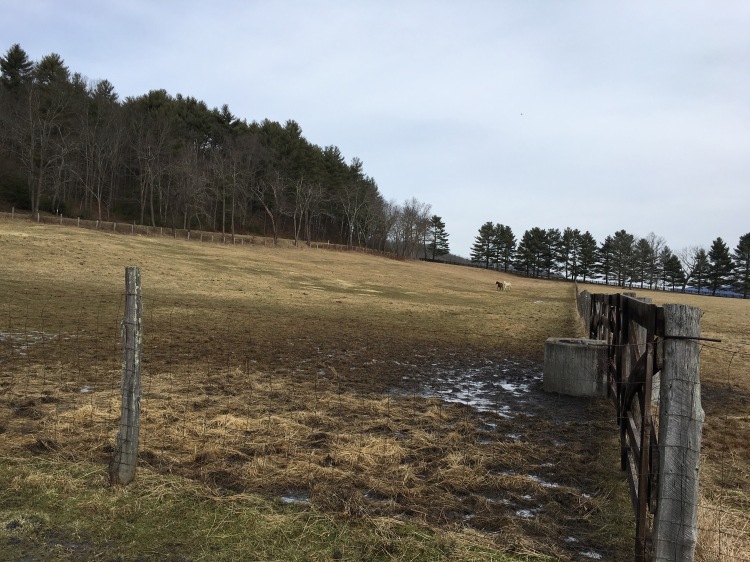 Not only did she seem to say – sure I forgive you for being such a goal driven short sighted human, I’m a horse, generous in spirit, and live in the moment— but I also watched her walk in without any sign of being off. She was ready to go mentally and physically.

Today we were meeting a local endurance rider who rides much faster than we do. We’d exchanged enough emails for her to know what to expect from us – including kahleesi’s average speeds.

If we didn’t slow her race bred Arab up too badly, it would be great to make a new friend. Someone to help motivate Khaleesi to tap into some of her speed potential.

Motivation is our word of the season. She has got to want to move and do it willingly and lightly.

I promised Khaleesi (really myself) that today I would not push and nag. If she wanted to – and could -keep up with them it would be great.  However if she wanted to drag her feet and choose to be the anchor then I would stick with her. She would come before the gps, and even before the possible new friendship we might make.

We met and said our hellos and headed out on the trail. A walking warm up the horses got to know each other a little and walked side by side when the path allowed. Khaleesi led to start (which was the only one of two times she would be in front of Eddy in almost 18 miles).

We did the climb up the steep way and it’s rough and rocky. Right as we approached the top I was lucky enough to see a back boot start rolling down the mountain behind us! I hopped off (actually a great spot for them to catch their breath) and went down for it. Sheesh- it really WAS steep. I was worried I’d go tumbling down on foot! At least it didn’t go too far. I took a picture looking up at the top.

She had basically stepped right out of the boot going straight uphill between the rocks. After putting the boot back on thankfully we had 100% boot success the remainder of the ride!

At the top we started to move and Eddy pulled out at a lovely ground covering trot. True to my word I picked up my energy and didn’t nag or beg- but Khaleesi moved into to her trot willingly and we got left slowly behind.

* She didn’t panic and the gap growing between her new trail friend and us. She didn’t try to move that fast, and I didn’t push her. Though I hope her pace increases, I am glad for the bright side that she is so stable and rhythmic and confident. She wasn’t a disaster trying to be something she was not on that day. Love her for that!

As I suspected she did have to pull back on crazy (not really- he was a nice horse!) Eddy. And she did for us. We found a pace that worked for us which in the trot is somewhere in the 6-8 mph range. It’s not exciting but she can keep it up for a long time. Right now it’s her efficient spot.

On this particular ride- the first time we began at the south end, but found it better afterword to start at the north end. Now Khaleesi seems to think the south end is the final destination so she perks up as we reach what truly is the half way point (the second time in our 18 miles she actually passed Eddy for a short stretch) and when we turn around (this is the second time riding this direction) she starts the turn around.

Now that I’ve stopped thinking of the turn around as a training issue and deal with it as a mental game we are doing better.

I am certain she is having a conversation with me- letting me know I am lost, we are going the wrong way, and she does not trust that I know what I’m doing.

While I hope in time to see less of this conversation, I do try to acknowledge her complaint and quickly head off the turn pulling her back on track and then pushing her forward in the right direction.

She eventually relents and gets with the program. 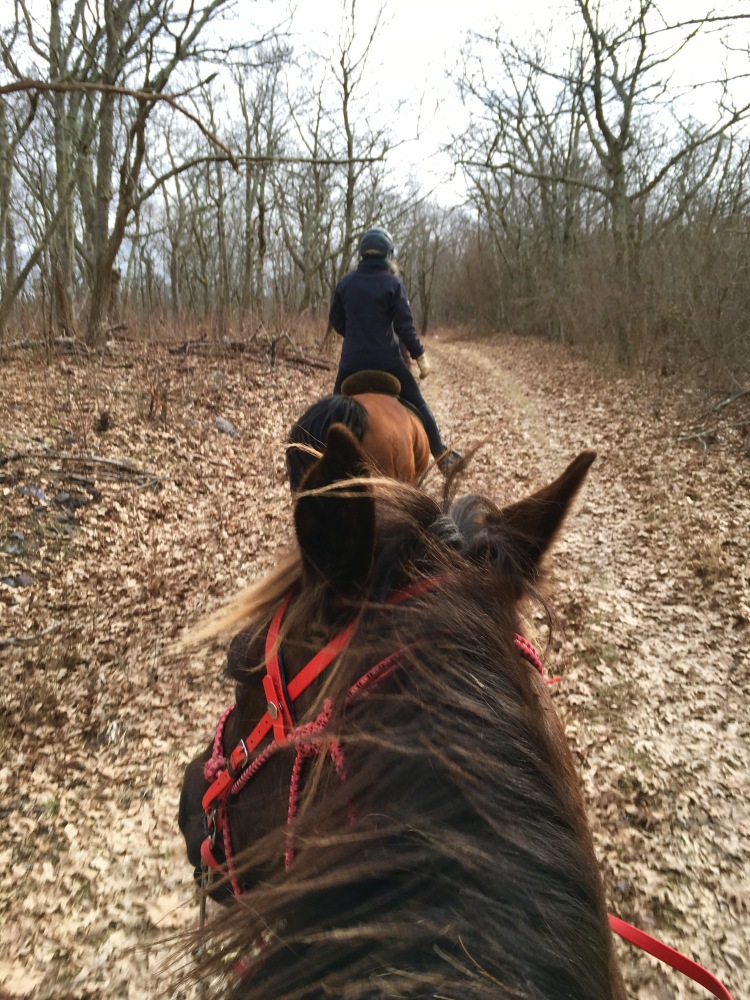 We trotted when we could. We walked when we got to icy spots or deep mud and gave the horses (Khaleesi really) a few walk breaks too. On the way back we even did some cantering.

Our new friend has a pretty impressive endurance record. She is one of the riders who go beyond the motto “To finish is to win” and for her “To win is actually to win”. She said she does the sport to excel and looks for the horse that will be likely to get her there and does what it takes to finish first if possible (and she has often done so) at least top 10. She is get serious or go home… Competitive type.

However I did not feel looked down on for having the goal to work within my current horse’s capability. For me the horse came before the sport. And I love her. Unless she tells me she hates endurance I will work together with her and we can be average in the pack but excellent together.

For me the challenge is to do our best, even if our best is to come in with the turtle prize sometimes.

It was a fantastic ride for Khaleesi and me. I lived up to my word and did not push her any faster than she was willing to move and though I did encourage her with my energy I did not push her with my legs, and of course (another bright side that some people with the fire breathing Arabians struggle with) I never had to hold her back to conserve energy. That struggle in itself can be draining on both the rider and horse.

In fact I most often trot her on a loose rein and find myself able to drop the reins for periods and balance with no hands and feel that float as she moves in that metronomic steady pace.

She did move willingly the entire ride and we finished with about a 5mph average which was respectable considering the mud and ice we came across and the steep up and down of the mountain to get to the trail. She looked great at the end of the ride as well.

I think we got a decent report… Khaleesi is not the type of horse she would look for to take top placings, but she told me she moved smoothly and efficiently, was sure footed, had a nice personality and a very metronome trot that didn’t waste a lot of energy. A pretty and solid mare with a good head on her. She felt we have a lot of work to do before our first ride in March.

I believe we are in good shape to finish though have no illusions of coming in competitively right now. I have built a great foundation with a lot of mountains and technical riding through our obstacle course trails. She is independent and confident and mentally in a great place to show up ready. She takes care of herself and eats and drinks well which is also important. We’ve been building up her bones, ligaments and tendons with long slow distance that will serve her in the long game.

Now we need to work on speed. That will come- especially now that I have some ideas on how to motivate her to pick it up.

Right now, we are in a good place! 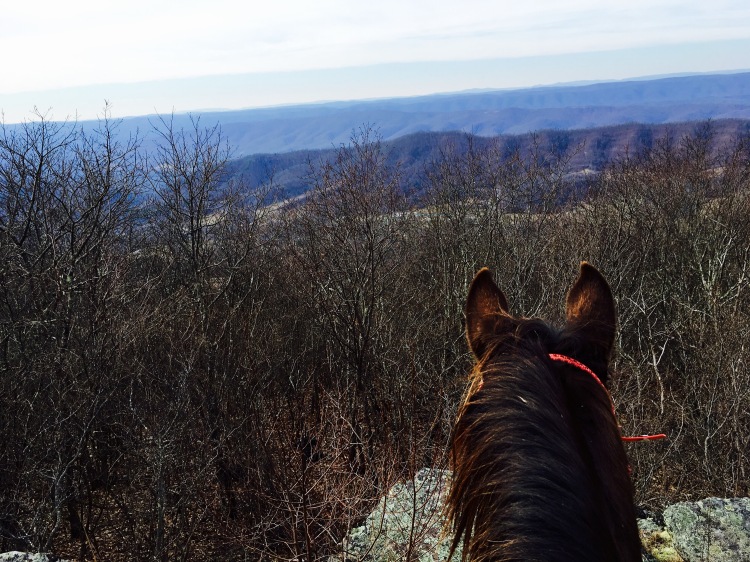