So far this trip has been the smoothest of my ride weekends. I feel a slight forboding as it’s been a little too easy somehow.

I got to the barn and found Khaleesi and Faygo both right at the gate in the early pre-dawn glow (their cycle is usually to be at the farthest end of the field before 8am).

When I tried to bring Khaleesi in before 7am on Monday she pranced, bucked and galloped full speed around the field instead of coming to me for so long I took Faygo in to the barn to feed and load my truck and left her out there acting like a banshee alone. When I returned for her the second time she still ran off in large circles a few more minutes before standing still finally and inviting me in to put on the halter.

I could guess what that was about but I’d probably have some human misinterpretation. In the end she took a full 30 minutes before agreeing to be caught and I was ready for that same 6:30am freak show this morning as I tried to head for Iron Mountain.

But there they both were waiting for me as if they knew.

Khaleesi put her head right in the halter while faygo ate the small snack I offered as a consolation. And as we loaded up and started to pull away she walked calmly down the fence line resigned – instead of her usual jogging back and forth and calling.

As if they knew.

Picked up Susan on the way off the mountain and we were on our way. We pulled in late morning and found 4 lovely spacious shaded spots right on the New River. Ricky pulled up not long thereafter with more of our ‘team’.

We checked in without fuss then vetted without a hitch. We went (all 5 of us) to the crew area (Triple C Ranch) and setting that up was light work with many hands! 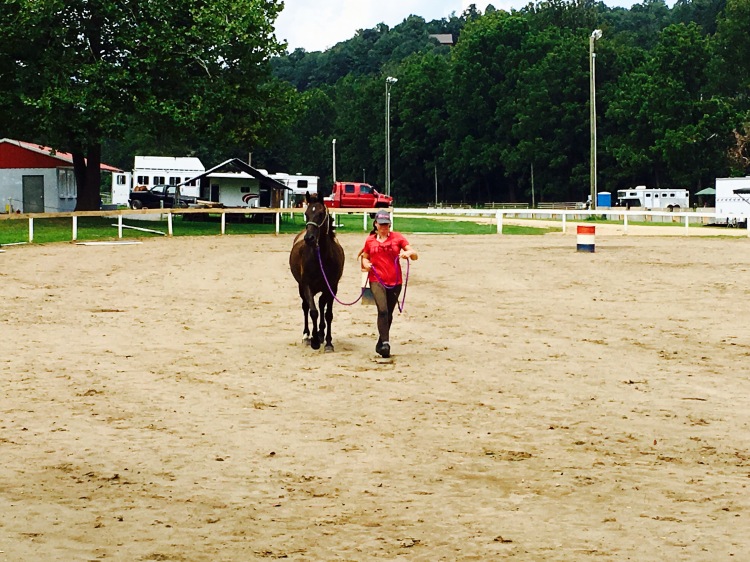 Upon return to camp it was warm and we had a couple hours before dinner so we donned bathing suits and crocks and I took Khaleesi into the river.

She’s laid down on the trail in mud puddle streams with me at least twice. This was the perfect time to try to swim her!

I hopped on bareback and could hardly keep her from beelining down to the water. She immediately stopped in the shallows and I knew she wanted to lay down but I kicked her forward. I wanted to get deeper. She complied but when we got in up deeper than her belly she would trot hop which could have been due to the mucky bottom I’m not sure, but it wasn’t quite deep enough for swimming yet.
I circled her a few times into deeper water  where it was just not deep enough to swim. What she really wanted was to lay down in the sandy shallows and I eventually let her. Hopping off I stayed out of her way as she laid completely down and rolled around sometimes dunking her head and nose under.

As we waded around in the New River she must have laid down 20 more times in the soft mucky sand- to the entertainment of the other horse owners who had normal well behaved horses that stood quietly in the water. Apparently I had a sea serpent. 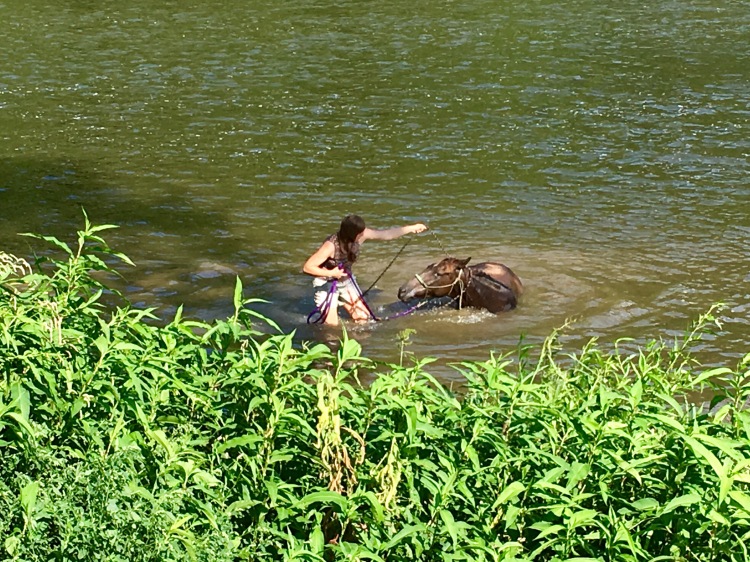 Again I was reminded of the water horses of the Scorpio Races book we listened to driving to Charleston this month. The legend of the Capaill Uisce  [kap-il Ish-ka] who were the fastest horses if you could capture and tame one. If not you could be their supper.

A carnivorous horse that comes up from the water each fall. Amy Stone might believe the carnivorous part… hopefully  she’ll be fast tomorrow!

Dinner and the ride meeting took longer than expected but all standard.

Before climbing into my hammock I spent my traditional few minutes under the moonlight with Khaleesi. The river seemed to have turned her fur to velvet and her washed out golden highlights glimmered under the stars. I slowly followed the curves of her muscles with my hand down the line of her neck and back till I touched the grease paint ‘143’ scribed onto her hindquarters.

I listened to her munching hay and drinking as I fell asleep.

Our luck continued however when at 2:30 am a loose herd came barreling through somehow not taking out Khaleesi’s pen (many others not so lucky). Khaleesi snorted and paced but no escape for her and eventually the loose horses were all apprehended.

Must have been a wild band of water horses come to lure Khaleesi back to the depths. This time however, she stayed.

Only a few hours to go. 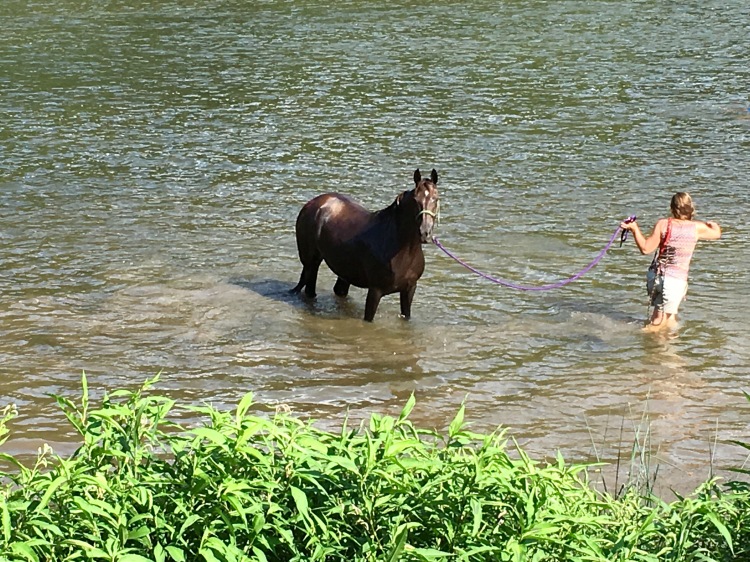