I've been asked a few times lately if I'm getting ready for another endurance event.

The answer has been the same since mid-June: Yes! Hopefully in September!

It's a long in-season hiatus especially since I didn't complete the OD so my last 50 was in April.

I don't usually ride in July and then had the trip to settle in Faygo making Ride Between the Rivers impossible. Then the clinic with Dee had to be the same weekend as the Iron Mountain ride… but doesn't everything happen as it should?

Meanwhile what is going on? Am I riding a lot?

What exactly does one mean by a lot….. 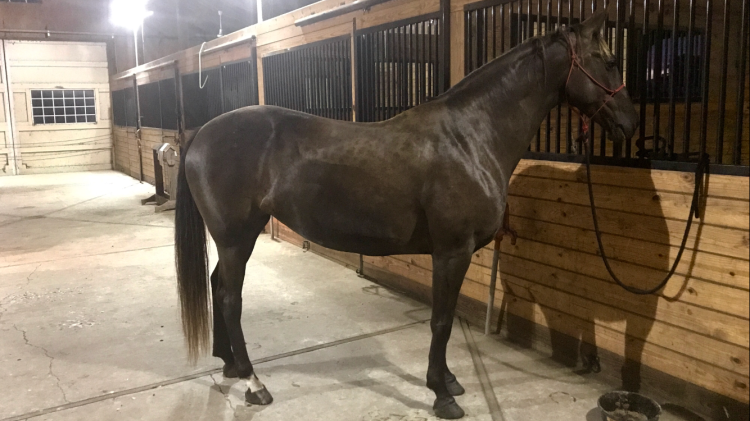 Building myself. Building K. Building relationships along with the physical structures. And Wild Heart the mustang mare seems to be at the center of all of it lately.

She has been teaching me how to build.

You know that saying:

Well I have to believe it with this one.

The horse I wanted and thought I was getting was a mustang mare who would have fantastic feet, ability to take care of herself, a good head on her, already gentled to humans and with some saddle time and a few trail miles. Just needing some more experience and confidence. Ready to hit the trails! 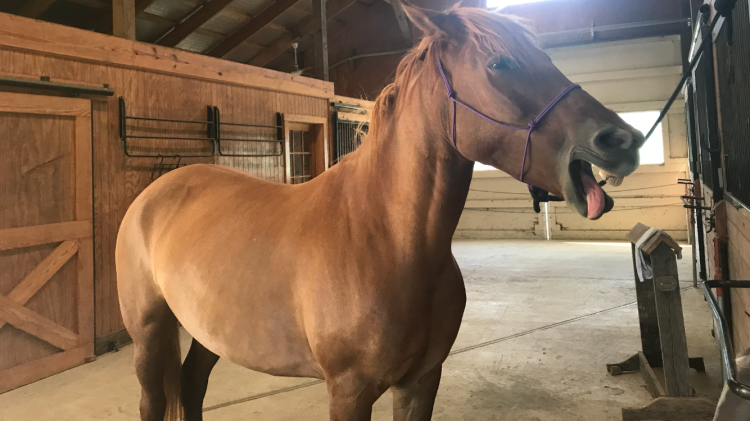 What I ended up with was a mustang mare with fantastic feet, ability to take care of herself, a good head on her, already gentled to humans and with some saddle time and a few trail miles that had a lot of questions and some residual physical issues from past injuries (likely in the wild or in captivity) and wasn't ready to carry any one of us around on her back until she got some answers!

Maybe I could have cowboy'd (is that a word? No offense to the great cowboy horsemen who didn't use violence and force) her into submission. But in my opinion that is how people get hurt.

I am well aware that anyone working with horses will get hurt at some point… I'd like to at least cut back on the likelihood of it being on purpose because my horse is sick of not being understood and decides I'm of no use to her anymore and she'd rather pick a fight than cooperate. Especially at the point when she realizes she's bigger and stronger (and probably in that instance smarter) than me.

I'd prefer to work together so we agree life is better when my brain is the one making decisions when we are together.

So I'm listening. And finally I've begun to actually hear (my equine translations beginning to improve) and they know it now.

And the horses have a lot to say.

It's like being immersed in another language knowing only a handful of words and someone you really need to work with is talking to you in that strange language and your brain hurts trying to figure it out without a translator.

At least that's how my barn time feels sometimes.

Yes. I'm the crazy horse lady now who thinks my horses talk to me.

How do I know it's not my imagination?

Because sometimes I get it right. And it's so obvious then. 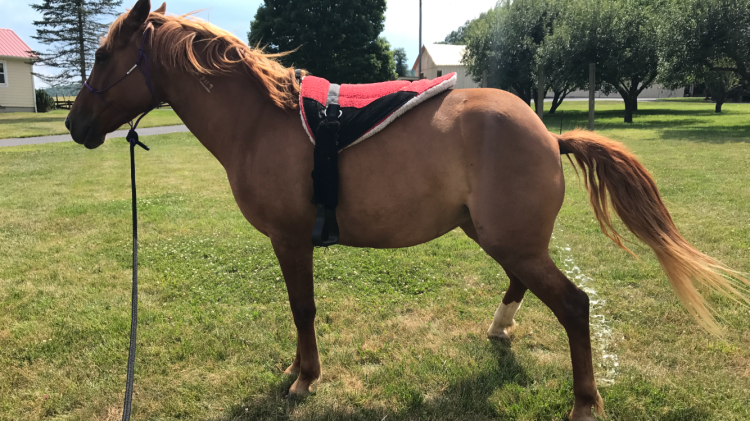 Wild Heart is basically good to be tied in the barn. For long periods of time too. For the most part she'll stand quietly and relax. Until she doesn't.

What I've often heard in training advice is basically ignore her – if she paws, gets antsy, impatient. Horses need to learn to stand tied!

She'll learn to stand there all day if I need her to. That's her job. Stand tied quietly as long as I ask.

Then one day my friend Pam is here and she sees the horse go from calm to antsy and asks: do you think she needs to pee?
 
Are you kidding me? No. I've never considered that. If she has to pee… she'll pee. She's peed in the barn before. We just rinse it away.

While we are talking about it she pees.
I rinse it away and think…. hm.

She is still a little antsy. Seems like maybe that wasn't it?

She pees again. (Within a minute).

Rinse it away…. boy am I feeling like an idiot. She peed a little to try to help me understand and I assumed that was it.

SHE PEES A THIRD TIME.

Now I have a horse who asks to go out and will poop and pee outside the barn and will ask to go. Not every single time we work inside- but more often than not.

She has not pooped or peed in the barn since that day. And she stands quietly tied for hours if I ask her to.

It's much easier to work on her feet when she's calm and not begging me to go out and pee.

In the past if she was antsy while I was trying to work on her feet I'd have assumed I have a training issue and need to train her to stand quietly.

Go figure. Come to find out I had a language issue and the horse was simply asking if she could go to the bathroom before working on her feet.

This is bigger than urination- because the problem that seems like that problem isn't always actually the problem!

I am not at all saying if your horse doesn't stand quietly when tied it has to pee. I'm actually saying the opposite…. that it could be a million things and the only answer to every training issue with horses is: it depends.

There is no answer or method that will work except understanding of their equine world and their communication. If you get the answer wrong because you didn't understand the question it ends up lose-lose.

So maybe your answer IS the horse needs to learn some patience and to stand quietly tied. Or maybe it's something entirely different. But it's the tiny things we get right or not that will determine the success with that horse.

In Heart's case I know she was saying she needed to pee because that answer worked.

I think back to how nicely this mustang had her feet trimmed by my farrier in months past- he'd worked with her twice.
Then the last time a blow up.

First answer is always the same: because I failed her. I put her in a situation she should never had been in.

That doesn't mean beat myself up and live there in failure but I need to sort it out because failure is only useful if it's about learning.

It also means I have to now dig myself out of her being resistant in her right front and leaning to care for her feet myself for the time being because I can't allow anyone to work with her who might jeopardize the relationship I've worked so hard to build.

Yes. It's that important.

And my farrier is good. I like him, I appreciate and respect him. I don't blame him. I blame myself for not following my gut that day in better controlling the environment – and very likely for not understanding she may have had to pee and just began with a question that could have been answered with respect to her…

The two things that ruin horses the fastest are ignorance and ego. That day both of those things came into play. It can happen in an instant.

One thing I've learned about having a mustang: there is little room for error. They are sensitive to everything and a change can happen very fast.

Hopefully I can use all that to my advantage. First in learning how to be better myself, and because she can have fast positive change as well… if I get it right.

It's Wild Heart that has insisted I get better. Fast. She has a lot to say and is much less patient.

Khaleesi talks to me and I understand like 10% and she seems to say: for a dumb human you're not so bad and I'll take the 10% and the fact that you're trying and I like you.

Heart talks to me and I understand like 10% and she says: DO YOU NEED ME TO S-P-E-A-K S-L-O-W-E-R? HOW ABOUT LOUDER? HELLLLOOOOO HUMAN…. ARE YOU RETARDED? Maybe if I nip or kick at her she'll wake up? 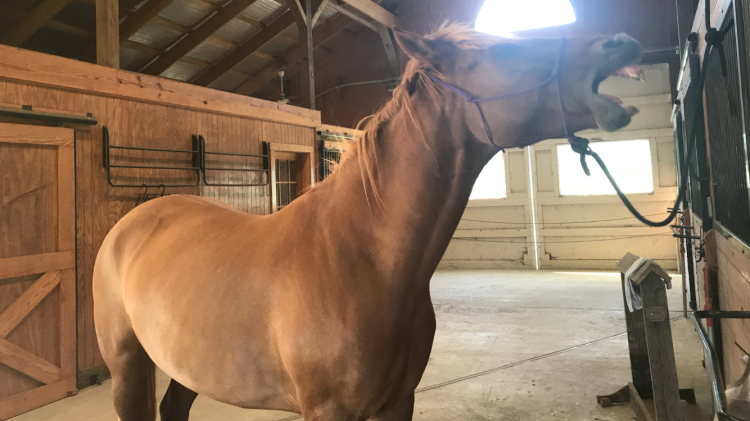 When you don't have a choice you learn or get hurt. Don't misunderstand me: she is an excellent horse!! This is not bad behavior! And also by listening to her communication and trying to help her I am not putting her in charge or abdicating my leadership role.

My job is to understand as much as I can and then use the information. And they know so much we are wise to ask for their report. I can say 'no' or 'not right now' or 'thank you but I have a better idea'.

Being a good leader does not mean saying: shut up I don't care what you have to say if you don't get in line I'll have to force you to and get frustrated or angry in the process. Then when I have an emotional melt down (anger, frustration, fear…) and yell at you-you'll know to just shut down and obey!! First I am riding my horse. Just not as often.

But second, I have this gut feeling that understanding my horse and leaning her language could be a vital component of a long successful career. If I work together with her and she's willing to carry me that far because we are a true team I will be more successful for longer.

If I learn her language enough for her to tell me when something isn't right early enough for me to adjust and fix it we will be more successful.

You know how so many people say….

If only they could just tell us…..

Imagine they are. Then it becomes…

If only we could understand.

The only way to understand I've found so far is through regular conversations practicing the language and listening and hearing. Assume EVERYTHING horses do is communication. NOTHING IS RANDOM. Sometimes I think about how much easier life was when I just went out put on a saddle and rode my horse. I had a nice one. She knew I meant well, loved and cared for her and she put up with me.
She was well trained.

Hopefully now I'm better trained. The horses are my teachers. I have many years to go before I'm fluent. But I have a few words here and there and at least am trying!