Mental building is important but to get to 100 so is physical building… which includes hoof care, nutrition and riding. My miles have been unimpressive this summer.

Most weeks I've gotten in a 12-15 mi ride and true, any ride around here isn't a walk in the park, but I am hoping to get through the Big South Fork 50 in September and the mare needs to be stretched a little more to truly be ready for that.

The rides I have done were more social than training (though our social rides still move along pretty good) and also I'd actively looked for decent footing trails as her hooves are still in rebuild transition mode and I really didn't need to tear them down while I'm trying to build them up.

Now I needed to put it all to the test. See where we stood.

I asked around to see if anyone was due for a good ride and Kelly (who is also my vet) was planning a mileage ride Sunday- so I dropped her a line to see if she wanted company.

Turns out she welcomed us to join however the location is about a 90 minute drive for me (minimum) and they had a start time of 7am to be done early enough for another rider who had later in the day plans.

That means leaving the barn by 5:30… which means if I am ready to pull out the night before at best arriving at barn at 5am to pull a horse out of the field in the still dark morning… meaning out of bed at 4:30….

The ride is exactly what I'd needed for K. And I was so grateful not to have to ride 26 miles up here alone that I was willing to go it in the dark to have the company! 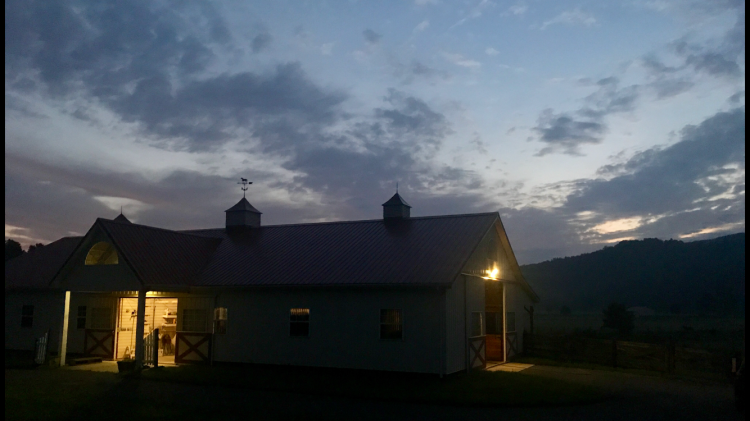 I showed up for a tough 26 mile ride with hoof boots in tow. I was practically holding my breath as I said.

The last thing I wanted to do was ruin a training ride for Kelly with constant boot drama. As it was we were tagging along with Hope- a tested 100 mile horse heading to another 100 in Maine in the next couple of weeks. We were with the big kids now.

Even more present in my mind was the fact that though my front boots were going A+ strong the hind boots didn't fit so great. (As of now I'm still waiting on the narrow boots to release.) She has narrow feet to begin with- and right in the middle of growing out nail holes so even more so.

The last ride was about 13 miles of varied terrain and with the exception of a hind boot twisting completely in a dry creek rock pile early on they stayed put the whole ride through walk-trot-canter.

The other hoof question is potential sensitivity. Will she move through the rocks? Up till now I've avoided rocky rides to allow her to build some callous- I prayed she wouldn't hold Hope up too badly.

Worst case scenario. I'd brought my gps. We could separate if we had to- she could go on and me home if it got too unbearable.

This was also the longest ride for my Balance saddle (if you're curious about constructive saddling do check out their webpage… tons of fascinating information!!)

I have my best go at the pad and shims. The sweat patterns are perfect, the saddle isn't falling onto her withers or spine, she's moving great- I'm actually super comfortable now that I'm used to it. However there is an occasional slight tweak around the loins that I can't decide is just a funny-bone type spot of if there's a little pressure.

She is not at all sensitive to pressing on it- but in running something down her back she'll twitch just a little… then sometimes if I do it over a couple times she won't… like it was more unexpected than painful.

The saddle is much more stable than I'd thought it would be and through the serious climbs (I believe at least 2,000 feet of elevation change- much more if you go by the GPS cumulative ups and downs – closer to 4,000 feet!!) I didn't have any shifting either forward or backward. That being said I'm still LOVING my Two Horse Tack breast collar (I just can't say breastplate… that sounds like a piece of war armor!) it's easy to attach, stays in place nicely, is great weight and thickness (not too thick). It still looks new and just needs a wipe down to stay that way (love love love biothane!). I thought I wouldn't like the English style with the extra strap on top of the neck- but I found I do like it. We had a fabulous ride and the two mares even seemed to get along (for my horse that's saying something- she has a lot of confidence and can be intolerant of any horse not respecting her space bubble).

Hope is a move down the trail horse and most of the ride she set the pace. Occasionally we'd fall a little behind on some of the tough rocky climbs and I allowed her to do what she needed to manage the footing without hurting herself and we'd catch up on a trot when the trail allowed. Much of the ride they paced nicely- especially the flatter river sections.

One of my favorite things about this mare is she will take care of herself and doesn't care too much about the other horses. She picked her way through rocky sections never getting worried even as Hope and Kelly got out of sight. There were a few times K wanted more time at a river crossing to cool her legs and feet, a few times she stopped longer at a drinking hole, and a few times she wanted a couple extra bites of grass.

Hope was impatient and ready to move so we just went with it- like in my blog The Work on Rider Etiquette I practiced what I believe as I told Kelly to let Hope go ahead- Khaleesi will do what she needs and we'll catch up. It is great training for K to focus on herself regardless of what the other horse was doing. That is important someday- riders will ride off while your horse is drinking… and other riders may be going to fast for my horse's best ride. And in 6+ hours – a little time 'alone' on the trail is really ok!

The front boots were once again A+ not one problem. Yeah Scoot!!

The hind boots hung in there pretty well. I had to stop once in the 26 miles for each hind boot (so twice altogether). This included the 2 mile canter up the fire road at the tail end of the ride with no issues!

And I was impressed at how well she took on that canter around mile 22 of a tough ride!!

She was forward till the end and looked great at the trailer. She munched on grass and hydrated hay pellets with a little coolstance in water while I rubbed and poulticed her legs. 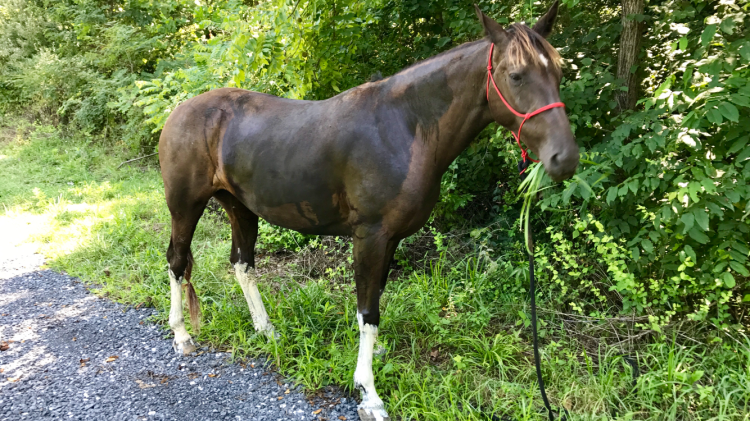 Next day her legs were tight and cool and I did a trot out video for myself barefoot on the pavement. Certainly would pass a vet check!

Maybe upon close inspection a slight mis-step here and there but from where we've been it's a great success! Her feet are not tender right now and I think finally getting to the shape they can better support her body and movement and I've taken the advice I read in various ScootBoot Blogs to hand walk her on a 'tarred surface' for a few minutes a day. Thankfully the driveway is paved and I make an effort to hand walk her every day I can out there barefoot. This is supposed to help develop sole calluses and toughen the hoof. I've also been told it's good for her ligaments and tendons.

I've also taken the advice of a couple farriers I've talked to to try pine tar. It is supposed to condition and help harden the sole. I only use it on the sole. I've used it about 4 times in two weeks with 2 of those being before and after the 26 mile ride.

The biggest factor I believe for her has been the probiotic regime the CST recommended. If her guts aren't working properly the nutrition just is not getting to the hoof (or hair or teeth etc). She's been on regular probiotics for about a month and I believe it's making a difference. Sandy (CST) said in her opinion within 45 days I should see changes for the better in those hooves and I believe her mane – which has always been a little dried and brittle is feeling softer and healthier already as well.

I also think her muscling and body looks great right now and her coat is shinier even though I'm not a grooming fanatic.

So this is the physical building and her feet for those asking!

I'm taking a class on 'reading the hoof' and will finally get an expert barefoot trimmer to look at what I've been doing the past 2 months and help me learn how to better care for and shape her feet!!

THAT will another blog entirely… soon!

PS: if you're looking for tack- two horse tack has a discount if you sign up for their newsletter!! Here's the link: