Friend via email: Can you ride Friday?

Actual reply: No, sorry… I have some meetings and rehearsals and can’t get away- you guys have a great time and thanks for thinking of me!

Inside voice:if I were free I’d have had to say the slightly crazy other half of the reply ‘well I’m not exactly riding right now; I have some work to do in the field… um yeah… no…. I’m not sure when I’ll be able to come’

I’ve been wondering for a while now what is going on between me and Khaleesi. Sometimes pretty good and sometimes just passable- I just have a nagging sense our relationship could be better.

I can always catch her in the field, I can get her on the trailer reliably, I enjoy our rides (we’re not in arguments), she is sensitive to my energy so I’m not having to pull or push on her- she’s a pretty light horse overall, and it’s been a fairly long time (over a year plus) since she’s kicked a horse while I’ve been on her (yes, for a super opinionated and bossy mare this has been something I’ve had to put effort into!)

Yet…. there’s room for improvement.

She doesn’t come running to put her head in the halter when I come to get her.

She isn’t calm and relaxed when I groom her despite the things I’ve tried to pay attention to: like which hand I use or how I’m approaching her or if the softer or harder brush is preferred.

She still occasionally has ‘ugly ears’ to the perfectly nice horses we ride along with. Sure- she isn’t kicking them and I don’t allow her to cut them off, but if she were more tuned in to me would she be more willing to go where I ask at the speed I ask and sometimes to share the trail… without feeling the need to be sure the other horses know how she feels about them?

She will load reliably on the trailer, but she doesn’t do it because she wants to and makes that clear. She does it because she knows in the end I will insist so might as well get on. (And no. Every time I load her does not mean hard work. Sometimes I load her and don’t go anywhere. And there’s a ride very close to home that is pretty easy where we drive a mile and ride home she seems to like that we sometimes do.).

As much as that may sound terrible to some- to me it’s a good thing. Because that’s all I can really work on anyway. So this means the issue (if one can call it that since we probably look pretty successful on a surface level) is one I can do something about.

It was actually trailer loading recently (with nowhere to go that day so I had plenty of time) that gave me some insight.

I’ve been working on my mental fitness with my horses and overall in my life for well over a year now. Many things are improving. I now have a whole lot more control over how I feel about working with my horses and do not allow anger or fear to destroy what I’m working toward.

However, as I asked her to load on the trailer… and considering I’ve loaded her before I had a pretty good idea that this was not a question of her not understanding what I wanted…. she wasn’t giving.

She avoided, she sidestepped, she tried just about everything to not get on the trailer. I had no plans of driving away to meet anyone for a ride and had plenty of time. I was not angry with her and really thought about what could be going on.

Was I blocking her somehow– asking her to load but positioning my body language to tell her not to load?

Was she concerned about Wild Heart in the barn? As the herd leader not wanting us to drive away leaving her tied in the aisle?

Was she ‘testing’ me somehow- to see if my reaction would hold up? If I would stay calm even if she didn’t give me what I asked for?

Then I noticed it.

I wasn’t angry or mad at her. But there was this little hint of an underlying feeling…..

I was definitely annoyed.

You know… you’re not yelling at the child to get in the car NOW or I’ll beat your bottom (that might be angry)… more like when you’re trying to be patient when they ask if they can go back inside for one more time to check on if that stuffed animal is safely tucked into bed you’re like ‘ok‘ said with a sigh, internal eye roll and a wish the kid would just realize stuffed animals do not actually have feelings already! 😑

As the layers get peeled back and the easy obvious issues get worked on then there are the smaller ones. I didn’t yell at her or jerk her around by the head or hit her with a stick but being honest with myself I was definitely annoyed.

And horses are a million times more sensitive than a human so she knew it too.

Equine leaders do not get annoyed.

The horse cannot figure out how to be more human-like. We can anthropomorphise all we want. They are horses and they do not think and reason like humans do.

Yes. I followed through, got it done, and Khaleesi got on the trailer and calmly ate some hay while I worked with Wild Heart around the trailer for a few. 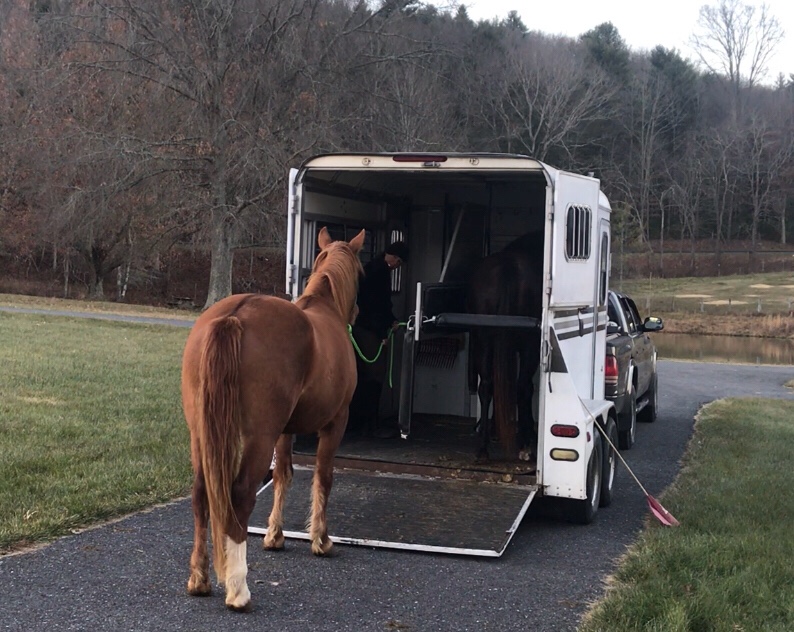 Then after some reflection on the afternoon I decided to get serious going forward about carving out more of the human attributes that convince my horses I cannot be completely trusted.

One thing I can see for sure is that it has got to be a real shift. You cannot lie to a horse. You cannot fool a horse (the way you can fool humans) about if the inside matches the outside. And you don’t get to play around with being that leader sometimes or if I’m having a good day or if I’m not under stress in my life or whatever. It has to be reliable and consistent because the one time I do something un-leader-like I have proven again I cannot be completely trusted.

One thing I’m not sure of because I don’t have the experience – is if my process to be a true leader to Khaleesi is more extreme (or not) that it would be with a more mid-pack or lower level horse. I have only seen Khaleesi take charge or at least make the effort to take charge of any group she has gotten to mix with. She does not lack confidence. I have never seen her (as I’ve seen Wild Heart and other geldings at the farm) look to anyone else for direction. So if my own experiences seem unusual or extreme in finding the leadership position I should mention that I’m fairly certain I have a top of herd mare who might need more proof of my worthiness than Wild Heart for example who is a mid-level mare naturally. 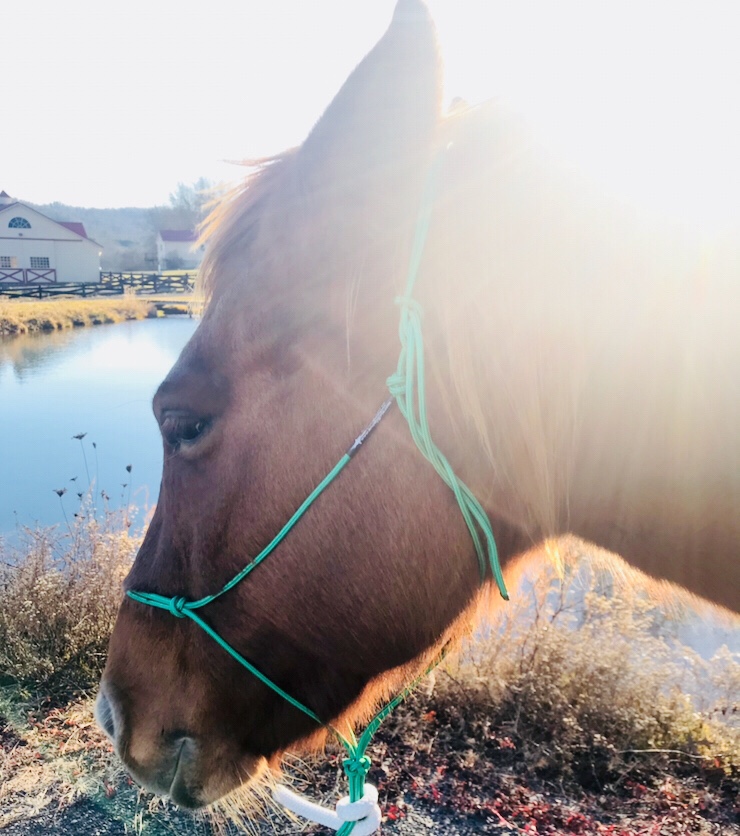 But in the end. This is why I have horses. To learn how to be that person. To grow and to get better. And then to have success in whatever I do with my horse because we’ve become a team and I am the brains and she is (as Buck puts it) a willing extension of my own legs. Or maybe if you prefer Tom Dorrance- I’m looking for the True Unity.

My plan is to figure out how to look more like the equine leader my mare is looking for. One she can trust to take over so she can relax and go along with me- because she has NO DOUBT: I’ve got this.

So I have made a commitment to become part of their world, learn and prove it. And I’m planning not to ride again until I make at least some noticeable headway.

I know. Many of you are certain I’ve lost my mind.

And the rest of you are not sure but wonder.

I have no idea how long this might take. 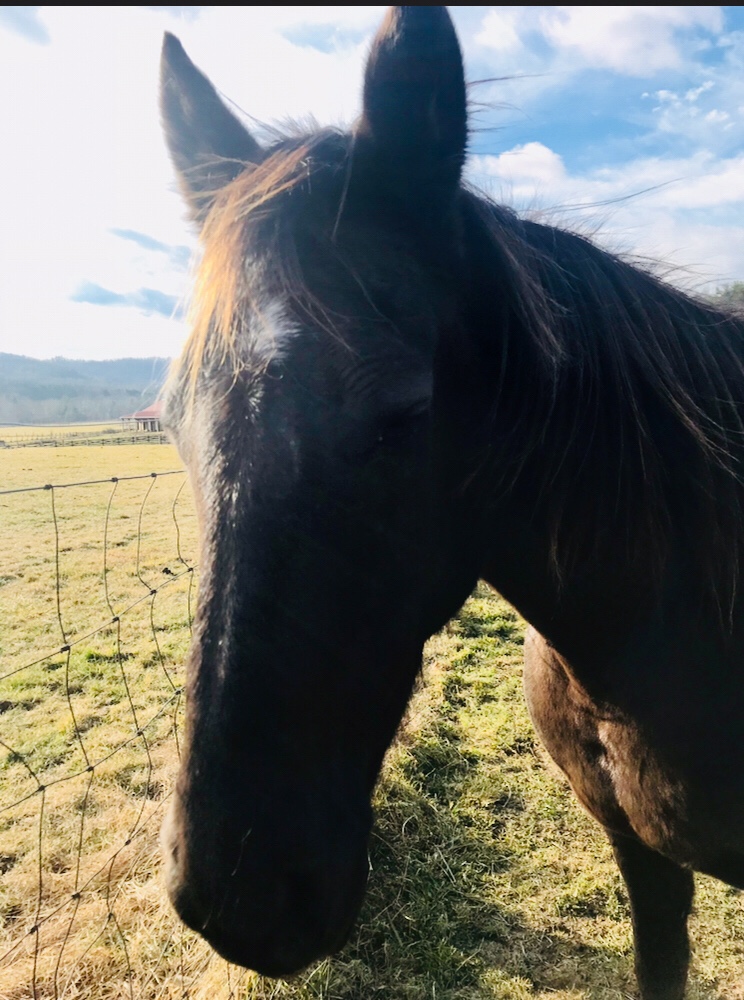 But I’m going to try.

6 thoughts on “Part of your world”