Khaleesi is now on a full week of rest. It seems like a really long time to me. It’s been actually one week plus one day.

She is now completely barefoot. The first missing shoe was that corroboration I felt (coincidence, depending on your worldview) the next shoe was my first experience in pulling a shoe that was never meant to come off without a professional (I did pretty well… with some help!) The last back two came off Sunday morning with a neighbor friend (D) who shoes his own horses and had the right tools and some experience (and a lot of patience).

We did it in the field and Khaleesi was good for the first back shoe- before she realized what we were doing. The last remaining shoe was another story. She decided she did NOT trust that guy and was not letting her near her white foot. She reared up on the line, pushed into me and acted like a monster.

I did not accept this behavior- but I’ve been doing my best to train her with calm energy and never to assume she’s “being bad”- but that this is something she is struggling with for whatever reason, and we will get through it. The bad behavior was not going to make us go away (until the job was done) but I have also made a commitment not to lose my temper in the process.

I backed her, called her in to me, worked her feet and then would put her back in place. It seemed like she knew it was wrong but she’d walk into me anyway to get away from D.

Repeat process. As many times as it takes.

My neighbor has lots of horse sense, I don’t believe he has bad horse energy- he’s not afraid or a high adrenaline kind of guy. Calm and matter of fact. Old school but also respectful. He was kind to keep patience with me for this favor. He would rub her on her front end and gave her time to accept him going back around to the foot. Worked slowly with her.

It was nice he was looking for reasons. There was probably one somewhere- but I told him in the end it didn’t matter the reason.

The shoe is coming off, and we’re doing it in the field on the bad leg she doesn’t like when it’s cold. And she’ll have to learn she will also live through this.

Sometimes I think as humans we want to explain things and put too much energy into finding reasons for behavior (animal and human). Occasionally it helps because we can find a better angle to work through if we understand a problem. But sometimes that thinking can get in the way and put up road blocks instead of solutions. Often I believe letting go of the reasons helps open up the flow for the change in behavior.

He wondered if tying her to the post would be more effective? (It wasn’t – I was willing to try) Other options were leave the shoe and the work he already did to cut the nailheads would make it likely to come off on its own [I don’t like that one] or we could also basically hog-tie her to get it done. [Nope, we weren’t doing that either]

Gotta be smarter than the problem… wasn’t it Einstein that said imagination is more important than knowledge? We needed to outsmart the issue not force it. If this didn’t work the failure would be mine- not hers. She’s just a horse acting like a horse. Use that somehow.

I was curious- could I pick up and work with that back foot?

I asked D to hold her lead and I walked around her and picked up the “good” back foot, thumped the tools on it, set it down. No problem.

Walked around to the white foot. Picked it up, she pulled it in a little- but gave it to me. I grabbed the shoe tool and played with the shoe (it wasn’t ready to come off- he still had one nail really holding on) but she let me.

I knew that, but I needed to see if it was the leg, the process, the tools or the person.

D (still holding the lead) came over and we traded- I took the lead, he took the foot. She stayed put. I walked slowly in front of her and he got to work.

I sang that tune about 25 times. I don’t know where that song came from, but when I had my first puppy I’d sing that little song around the house to my little doggie (it was a rescue pit bull, so we didn’t buy her and she wasn’t in a pet store window, but it’s a catchy tune). It has become my go-to song when I don’t have more time to be creative.

[James Taylor songs tend to be the ones when I’m riding and not sure what my horse is going to do about something in our environment or they are acting squirrely. Fire and Rain is the standard there.]

I always sing when I may not be controlling my physiological stress response well. I don’t want my energy to make her worries worse- and that happens SO fast with a sensitive horse. The singing regulates my breathing and heart rate, and distracts us both.

I also gently grabbed a bit of skin on her shoulder- not hard, but if she began to dance while D was getting that shoe off- and had the potential to hurt him with nails and tools in a bad spot, I would have grabbed harder in hopes of distracting her brain from choosing badly to buy him enough time to finish or get out of the way.

I didn’t need to. She stood for the time he needed to finish clipping off a tough nail end and pulling off the shoe.

Monty Roberts says you can see how your work is going with your horse by how they act when you release them in the field. If they run away from you right off it is not a good sign. Considering how she was uncomfortable with what we asked her to do just minutes earlier I was glad to see her stay close and relax around us as we picked up the tools and chatted a few more minutes there. I think that means we ended positive.

Her leg already felt much better before we started the shoe removal Sunday (almost one week of rest). D had felt her leg on a visit through the barn over a week ago when it was worse and he said now there was no sign of swelling. I still felt a small bit but maybe that’s because I’m looking for it.

I have some pictures to share of Khaleesi on pasture rest… As you can see they are of me riding Faygo who seems to enjoy being the chosen one again for a while.

With cold temperatures Faygo has been doing well. She still has a harder time breathing than other horses we are with, but she recovers better now. I love riding her and I love her personality. I took her to the Richmond area to have some easy quick riding with friends in the “flat-lands” Faygo’s specialty- no mountains to climb. She loves to go and go-go we did.

This week is Thanksgiving so they are both on a break now until I get back from some family time.

The more I am exposed to the endurance community the more I learn about horses, riding, and conditioning and the more I’ve been hearing about the importance of rest.

I also heard a podcast tip from an eventer who talked about how important it is for athletic horses to have time off. Not just physical rest, but mental rest as well. He suggested ideally 4-6 weeks between seasons for a horse in hard work. 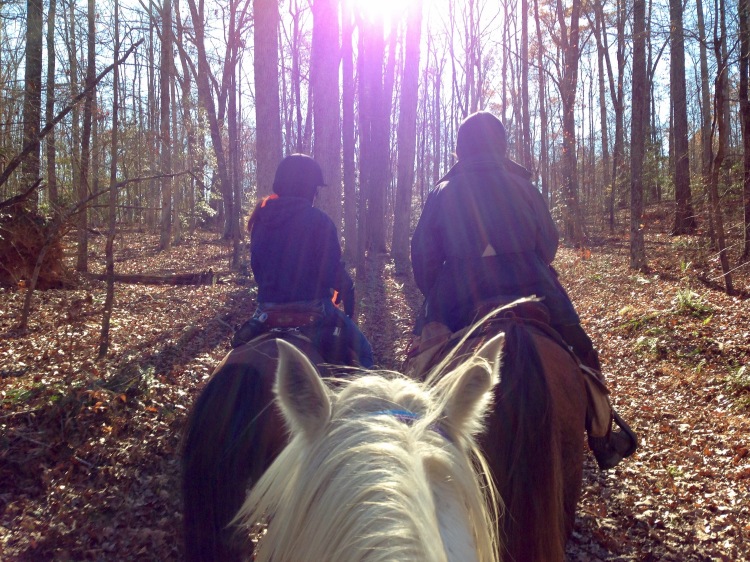 Endurance folks also talk about young horses needing time for their tendons and skeletal structure to harden. She is 5 years old- but only really started in work this year. Thankfully she came from a life where she roamed hundreds of acres in a horse herd- so she had been developing some of that base before she came to me. I certainly don’t want her to be over-ridden early on to put us in danger of stress injuries too young in her career.

If you are interested in what others say on the subject- I enjoyed this article: Down Time for the Sport Horse. I have seen the cycle of time off turn a horse that was getting sour on too much work improve our time together.

There was a time I wouldn’t have gotten a second horse except that Faygo was just not going to be able to handle the workload physically much longer- now I am very glad to have two great horses to share my love for riding because Faygo is much happier not being ridden so hard so often, and Khaleesi really needs some breaks especially as she’s still young and developing physically AND mentally. I hope they both WANT to work for me for years to come. Sharing the load is a big component in that process.

I am certain I will not put Khaleesi out to pasture for 4-6 weeks (unless injury mandated), but I can say that this winter is our off season and we will be walking around the mountains at a slower pace in mud and snow for shorter rides and she will have many more days off than in good weather.

So as I close our latest blog: Happy Thanksgiving to you all.

In the spirit of the season I’ve thought about things I am thankful for and one big thing is you- my blog family! I am often touched and surprised to find how many people enjoy keeping up with our story and I love that our journey is fun for others to share.

Thank you for reading!

One thought on “Down Time”