After a year of RE-GROWTH it is a welcome change. I began January with a trip to the Yucatán to work with children and hand out food and help to local families

and I’ve done some fun music events that seem to have sprung up out of the ground… but I believe the GO is also in my barn life too. In fact I’ve begun helping a young woman with some ways to connect with her horse a couple weeks ago and there are few things I enjoy more than seeing people connect with their horses!

Last year I only got through one successful ride and it was a 30 mile LD in April. After that roadblock after roadblock kept me at home working quietly toward foundational strength. Things I was forced to do and took immense patience but that I know will pay off moving forward

I gave up writing about it. It was both hard to explain and every time I tried in my mind I sounded a little crazy.

Yes my horse isn’t sound an no one can quite figure out why. But it’s ok… you see I had this dream…….. 😙

What did I do? Well, we walked a lot because she was sound for that. And I focused on what I could at a walk: balance and straightness. Self carriage and strength. I went for excellence and focus no matter what we did. I worked on a more dialed in nutrition plan, and I tried composite shoes which seem to be making a big difference.

I also did more groundwork and liberty style exercises that solidified our relationship even more than before. 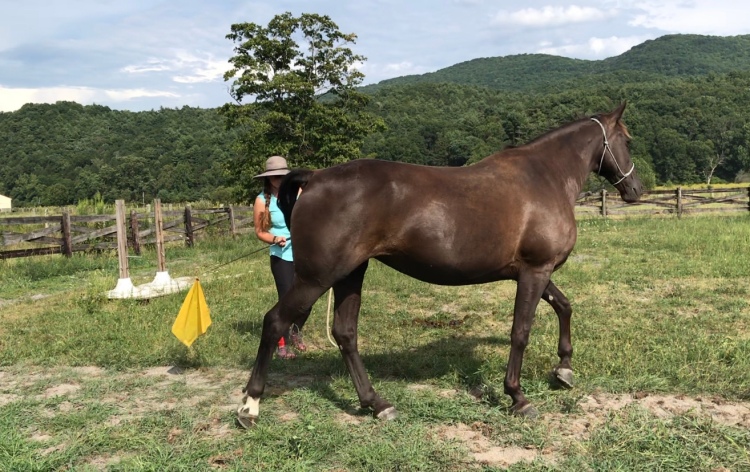 And I gave up being concerned about any riding goals I thought I had.

She became truly my friend and partner; no matter what we could do together I was thankful that we were together and that she was my horse regardless of what we could accomplish. I appreciated her just because she was Khaleesi. And that was all that really mattered anymore.

And somehow… because I had these dreams… I believed that things would change.

I hope that time has come.

With a horse that feels as strong as a mountain when I ride her and has balance, more self-carriage and a deeper than ever connection to me; at the end of December she convinced me to keep riding one day until we had done 14 miles and for us that was the longest ride in about half a year. She only picked up strength as we rode that day and showed off the most floating flying trot I’d ever ridden with her. She was begging me to go.

I still have winter to contend with and work to do so I can’t ride as much as I’d like; most likely that is for our own good because no matter how well she is doing she will need to come to fitness gradually. I tend to be all in until something like an injury gets my attention. I’m working on that. It can be a great strength but it’s also my greatest weakness.

Yesterday we enjoyed a short ride with lots of transitions for trot intervals, cantering, and mountain climbing. But a lesson emerged in my mind as we rode.

Where are you going?

In the case a directional choice is ahead I always begin with mental intent. I decide firmly in my mind where I am headed before we arrive at the intersection. I also know which way my horse prefers and if it’s the way she likes to go it’s always easier. If it’s the longer route that includes a big hill that she knows will mean more work I stay firm in my mental intent. Then I look where I intend us to go. I use my eyes first and if it’s a turn I turn my head and sometimes my shoulders.

Often she will comply but occasionally she will try to go the way she prefers. I then have to pick up the reins (just slightly) and add a layer of communication that is louder than just my mental intent and my physical orientation. At that point it’s what I would consider level 3: an aid.

Because of the relationship I have with Khaleesi it’s rare we would go beyond level 3 anymore. And often she will even pick up my mental intent at level 1 and that is so much fun.

When you think it and the horse does it. That is what I want as much as possible. That is us functioning as one! But it takes time and especially it takes me being better at it all the time.

Watch yourself to see how you use your mental intent while riding. We give so many mixed signals because we don’t practice controlling our minds and energy intentionally it’s no wonder horses learn quickly to tune us out unless we shout level 3 and above!

In extreme cases for me now though it used to be more common, I’d have to go up to higher levels including force like using a leg, higher rein pressure or even having to pull to steer, there was a time we would end up going in circles a few times as the discussion for which way was really loud.

In the other case I noticed yesterday sometimes there is more than one path toward my desired direction. And in some of those cases I will not send a strong signal but one of a more general long range one and allow her to choose which path she is inclined toward. I am still setting the direction. The bottom of the hollow… but it winds through open woods and the trails separate and converge in a few places. As long as we are heading down the hollow those ways are all really fine.

It occurred to me that God can direct us in these same ways. He would most prefer we have a connection and relationship that he thinks it and we hear in our hear and we go… even if we know it means a longer route and a mountain climb.

Yet I often try to pull toward what I think of as the better route… usually shorter or easier at least in my own mind.

Thankfully He will get louder and bigger and even force me into circles until I comply (it’s when He gives us up to wandering our own way and figures when we get stuck in the mud pit that we’ll finally call for his direction that we should really worry!).

Yet there are times when I think he doesn’t give as precise and intense directives. Times when he says take what you understand… we are going this general direction, and go ahead and go right or left around that tree. Both are ok.

One thing for certain. I want to be sensitive enough that I am looking for direction. Because I’m tired of the mud pits and the grapevines my legs get all tangled up in because I didn’t realize what was up ahead when the short term seemed fine to my short sight.

That process in both cases takes time and trust.

But it’s so worth it.

3 thoughts on “Where are you going?”