We loaded up at 7:30am and headed down the mountain to the vet. Khaleesi was already improved from 3-legged lame the previous day but she was still noticeably off.


My farrier said he was sorry he couldn’t meet us at the vet and I assured him we’d stay in touch. It was a nice thought but I know how busy he is.

When we pulled in Kelly said she was glad we were getting together right away instead of waiting until Friday (the original time the office set before she’d received my text video and contacted me personally) – me too. Especially when she saw her come off the trailer:

She’s already 90% better than that video you sent yesterday.

I thought 90% was a stretch but she said regardless it was a very good sign that she was recovering so quickly.

We were pretty certain that it was the hoof as there was some heat. I asked if she was picking up digital pulse and she said yes but it’s tough to find.  I always have a hard time when feeling for digital pulse on her and it makes me second guess what’s going on.

Kelly suggested she’s in such good shape that her heart rate is already slower and makes it harder to pick up. But it was there though somewhat faint.

I trotted her for them see her head bob and the extent of the left front lameness. She examined what she could with shoe and pad – tapping all the nails and didn’t find any of them particularly sensitive. She tapped on the front of the hoof wall and K didn’t like that so much. Kelly said you could see that front tendon pulse when she knocked the hoof from the front.

We decided to go ahead and pull the shoe to get more information. 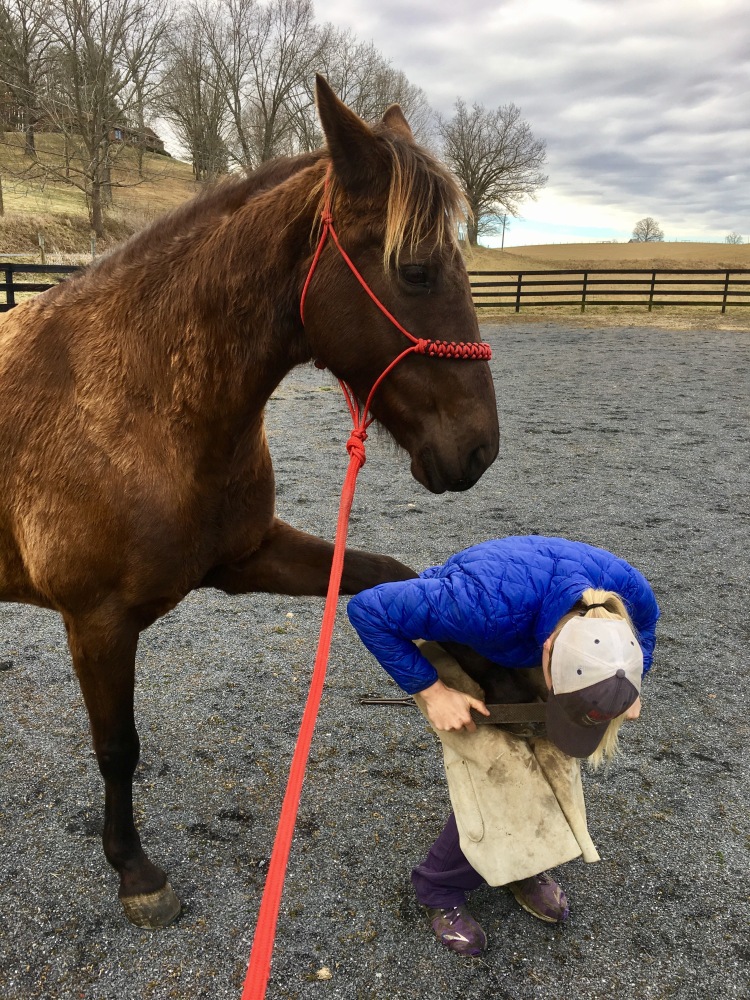 Hoof testers didn’t seem to reveal anything obvious except if anything she’s more sensitive on the inside of the front of the hoof. The tapping was the most obvious and Kelly thought it was possible she hit it on a rock – like stubbing your toe- more likely than a bruise on the sole (which makes sense since she is padded to protect from that). She pared out a small bit of sole to see but nothing was apparent so she stopped. It didn’t appear to be an active abscess.

Then we trotted her without the shoe and she was still off.

Next a nerve block to see if we could be completely sure we weren’t missing anything- if we numbed the nerves to the hoof only and she was sound then we’d know we didn’t miss something in a tendon, leg or shoulder.

Sure enough she was basically sound after the nerve block so at least we could be confident it’s her feet.

​​
So we are back to major changes in her hoof shape which were very likely a good thing but we’re paying up front so to speak with issues now to hopefully have her set up for more success in her joints, bones and tendons during her career. Her feet, angles, and shoes look great now but she needs time to grow hoof underneath her.

Here is where it’s nice to have a vet who also endurance rides. She went through a similar process with one of her endurance horses and sees a very similar case with K. She said a few months of hoof growth and proper trim made all the difference but it does take some time.

Meanwhile I’ve ordered a supplement the hoof folks recommended (California Trace) that has a good combination and ratio of minerals to help support that hoof growth. It may not produce a miracle but it can’t hurt. We are considering putting her on a short term medication that is often used in laminitic horses to encourage faster hoof growth and healing to see if it speeds the process.

We are also talking with my farrier (had a call with him when we wrapped up the visit) about easy shoe products that are basically rubber or rubber with metal horseshoes that would give her better concussion protection and also allow me to continue filing back her toes in between shoe intervals to keep the hoof growth in the right direction (think regular pruning of a tree).

Kelly is about to start experimenting with these in her performance horses so hopes to get ahead of the learning curve for us.

But in the immediate present she said not to give up on the March ride yet.

Khaleesi is more than fit for this ride. You shouldn’t ride her in the next 10 days anyway- you’ve created an athlete now leave her alone – she will excel on more rest than work right now.

The ride is soft footing and if she bounces back in the next 5 days she should do well if you aren’t trying to ride in rocks and hard pack.


We have wet poultice pads on her foot wrapped in bandage and then in her hoof boot in the field. This should help soften the hoof and draw out anything that might be starting (abscess). She is on butte for a few days to help with inflammation as well as omeprezol (to protect her stomach from the butte). I am also icing once a day. We can’t be certain an abscess won’t brew in there but these things should help offset that possibility. 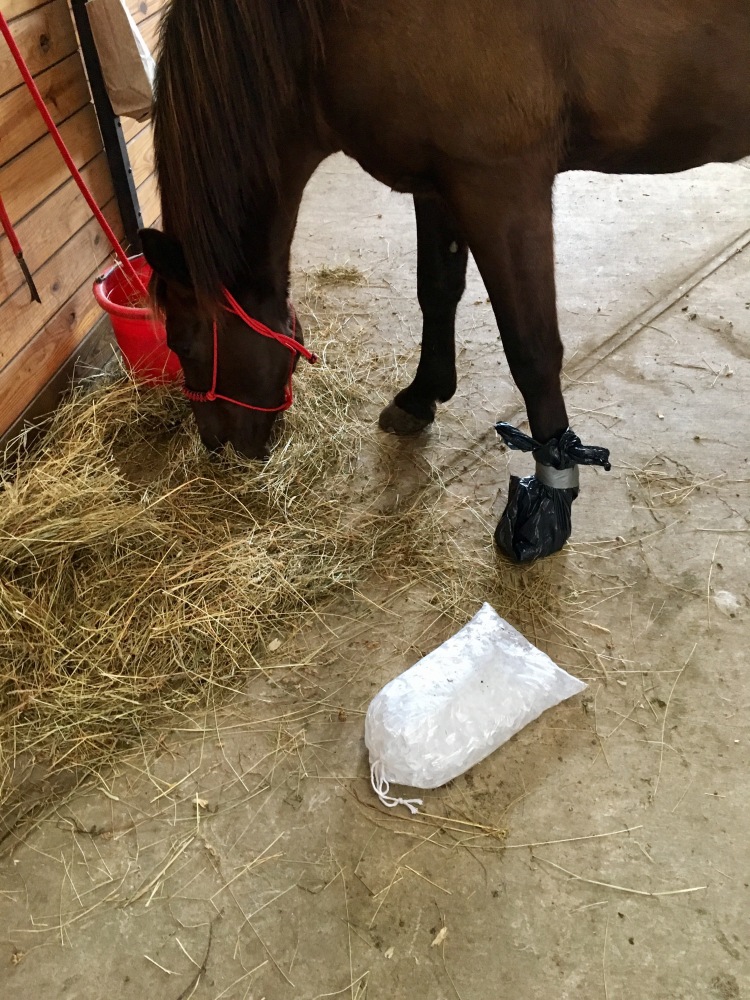 Also I’ll adjust my riding/training for a while. She can walk all she wants on tough surfaces without having to trot and we’ll look for easy footing to work on speed. This will help keep her sound while her feet are growing and changing.

I am also going to send some pasture samples to our extension agent for testing. It’s a long shot but a friend sent me a study regarding horses being sensitive to a mold endophyte in fescue. It’s called fescue foot in cattle and only has been considered an issue in pregnant mares when it comes to horses but some studies are showing that mild lameness can be found in some horses as well. It doesn’t affect all- and there’s another horse on the farm that struggled from a mysterious lameness after coming up there about 2 weeks this fall. They tried various things for a month or two and eventually ‘gave up’ on the horse as they couldn’t get him 100%’sound and took him to another pasture to hang out a few miles away. He got better within about two weeks of leaving. — I know it seems unlikely but at this point I’m curious about anything (and so is Kelly). If we have the endophyte and it’s making it harder for her to stay sound it’s at least something to consider in the equation.

Another far flung idea that was suggested to me is struggling from low grade sub-clinical laminitis from her years as a feral horse on all the grass one could ask for and only as much exercise as she felt like. The X-rays do not show any separation in the laminae at all and we feel that is least likely at this point.

​​
I asked it it was ok to put her back in the field. She is not used to or a fan of being stalled though she willingly stayed in last night when she was so bad. Kelly said as long as her field isn’t too rocky she should be ok- I’d like her not to be cantering around like a wild thing especially on rocks and hard ground.

That should be fine.

Well. She felt so good that when I let her out into the field she showed me just what she thought of being on pasture rest. And I winced as I heard Kelly say as long as she’s not running around.

I got a chance right away to redo the bandage. I was worried my hoof boot was too tight with all the layers so I left the top strap off. 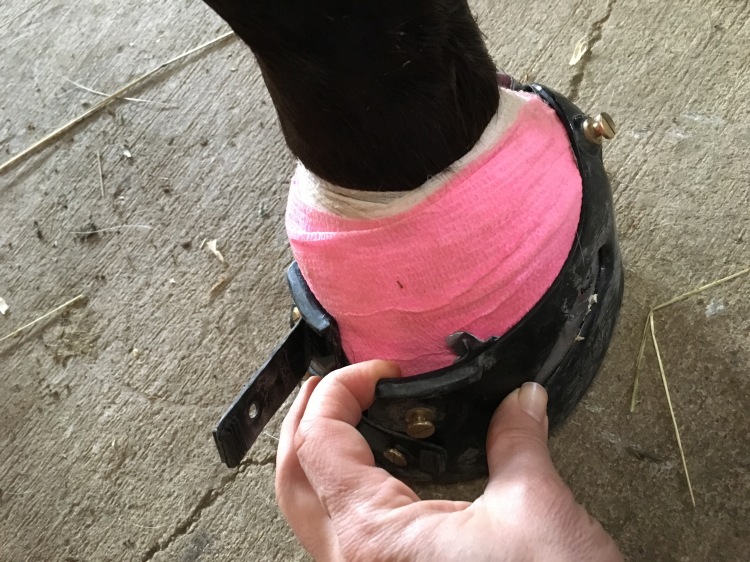 Mistake. After re-bandaging I closed both straps. And she stuck with walking around as well so hopefully tomorrow the boot and poultice is still on. 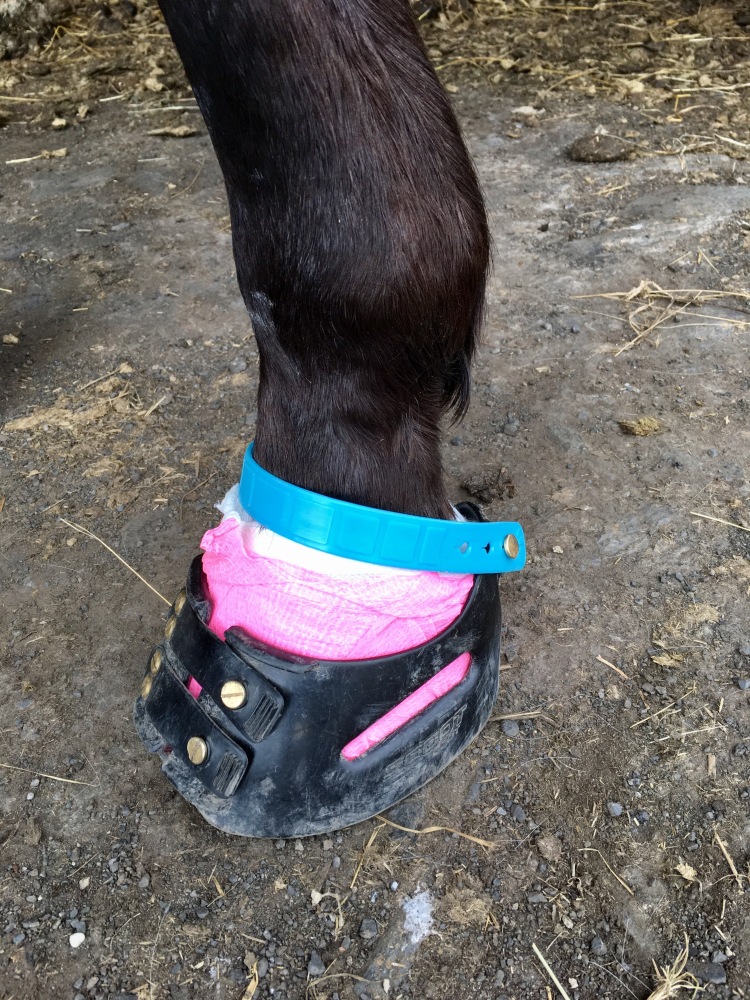 So again we hit the field rest button and see how she does when we pull her off the butte in 5 days.

I told Kelly that today I’d hoped to do our last long ride and leave 10 days rest. She expressed once again that Khaleesi can easily take 2 weeks off before a 50 and didn’t need one more long ride today.

She’s totally fit for this.

I have written here that I’m listening to the pleas for rest… I am trying to get that… but TWO WEEKS???? It just seems so much…

I said that I had this other voice that was telling me that I’m going to be asking more of my horse than I’ve prepared her for… and that is unfair and can injure her. That’s my struggle to get past.

She said she understood. She shared with me her first 100 and how she was convinced that she would be crawling into the finish and dragging her horse behind her. There’s no way they had ‘done enough’ – she’d been in vet school at the time and just didn’t have the ability to do what she thought she should. But in the end she was still holding her horse back at the finish line and he had a ton left over. Because he was ready with a good fitness base- and rested.


I am reminded that I can be so hard headed the universe is still screaming at me to understand things. In this case as I drove home I heard it screaming you don’t need to do one more ride. She needs to rest. Jeez, I’m sorry we have to keep doing this to you but you aren’t listening.

As many have reminded me these animals are great at keeping us humble. A lesson I learn over and over again after I feel I’ve worked and studied and tried my best so we should be ‘golden’. But as my friend Kate reminded me on Saturday- it’s the luck that no one really talks about. Some are lucky and some are not. Sometimes it doesn’t matter what you do and how hard you work and what amazing care you give. Sometimes you get lucky and sometimes you don’t.

So we’ll keep trying to do our best- and we’ll take some luck if we get it. And when we have a great ride- we’ll also be thankful that along with preparation and training and hard work- we also might get lucky. 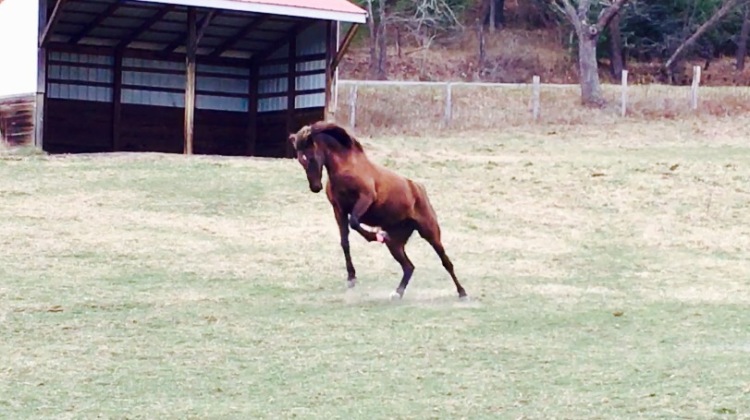