It takes the time it takes.

The biggest problem I run into when adults come to me to learn the violin is that their brain works faster than their body.

It takes a long time to master the fine skills to play the violin- and when I say fine I mean small. It’s the smallest string instrument and balancing the bow and finding the exact right place for each finger to land within an eyelash to be in our out of tune without a fret or key to help guide but only the connection of ear to brain then to finger is challenging enough then the fact that normal life doesn’t use the exact small muscles needed, it takes a long time to gain “fine” control of them and you use the right and left sides completely differently: left is the bow which creates sound and right is violin which creates pitch.

It’s not difficult in concept, however it takes a long time for the body to catch up no matter how old. A kid doesn’t have much expectation to get in the way of the process. Making a sound on an instrument is fascinating enough- they don’t even need an entire “song” at first. Then their bodies and brains are still forming and the skills needed become part of that development.

I have had very very few adult students over the years overcome this barrier with the violin. They know what they should do, they know what it should sound like, but the instrument cannot be tamed any sooner than its ready. Most cannot wade though the dismal swamp of discouragement long enough to come out the other side. In the end it usually just isn’t worth it. I never blame them, it’s a great learning experience to even try and many get enjoyment out of even learning a few simple tunes, especially if they’ve never played a musical instrument in their lives.

I see this basic process mirrored into my own life-

I want something. It’s often a good something (a scholarship funded community strings program… a horse I started myself even though I had no experience training a horse… better relationships where I learn to give more of myself)… the something is even better if it’s unlikely, hard or even has uncertain success!

Then I figure out what steps will get me there and I’m ready to go! I’m tireless, nothing will stop me. I can be singleminded toward my vision. I’m willing to work hard, learn, practice, and since I’m fully on board I want to see results…. not yesterday… but immediately! Now!

This isn’t a bad thing, and it is part of how I’m hard wired so even if I can tame it in some way to be a little easier on those around me, I need to use it.  It’s a gift I can’t take credit for. It’s part of the “Who Am I?” question I’ve been writing about. In fact I get a lot of really cool things done, and I learn a lot in short amount of time and if I wasn’t motivated I would have a lot less wonderful things to show for my life thus far.

Yet it’s not always that simple!

An example of how this can work against me came to the forefront as I continue trying to improve my riding.

I know that my body imbalances affect my horse. It’s something I think about often. When I began working Khaleesi I vaguely understood this concept but not nearly deeply enough. I created a horse significantly strong sided to match my own body. This shows up most apparently in the fact that there is a trot diagonal that has always felt more comfortable (Right).

Like my adult violin students- I’ve known this but the knowledge is only a small first step. Fixing is tougher. I’ve had a few minor injuries over the past two years to my right leg. The compensation has made my left leg stronger- and being right handed I think there’s already something about the cross-connections in the body where I’m upper body right strong which corresponds to lower body left strong.

That all being said though I have some ideas about it there are a google of variables involved in each of our bodies (mine and my horse’s) – then you combine our two bodies working together and as I descend the layers I get overwhelmed even trying to sort out what is going on!

Over time I’ve worked on my own body balance both in the gym and with body work. I’ve worked on becoming more left-handed. I’ve paid attention to how I do chores and how I walk and sleep and brush my teeth….

I’ve worked on how I ride. Watch more carefully my balance and when riding try to change diagonals more frequently. My horse doesn’t seem to understand the whole process though. When I switch to the weaker diagonal she usually checks in with me as if to say:

why did you do that? that doesn’t feel good- you aren’t good at that side- do the one you are good at!

Sometimes she tries to throw me back on the stronger diagonal.

Sometimes she just stops trotting in an attempt to train me that the bad diagonal equals go back to walk.

Then when we’re out on a really long ride if I use the weaker side too much she gets tired and starts to feel off. (This also makes complete sense why she had minor overuse damage showing in one coffin bone and not the other in her radiographs two years ago). 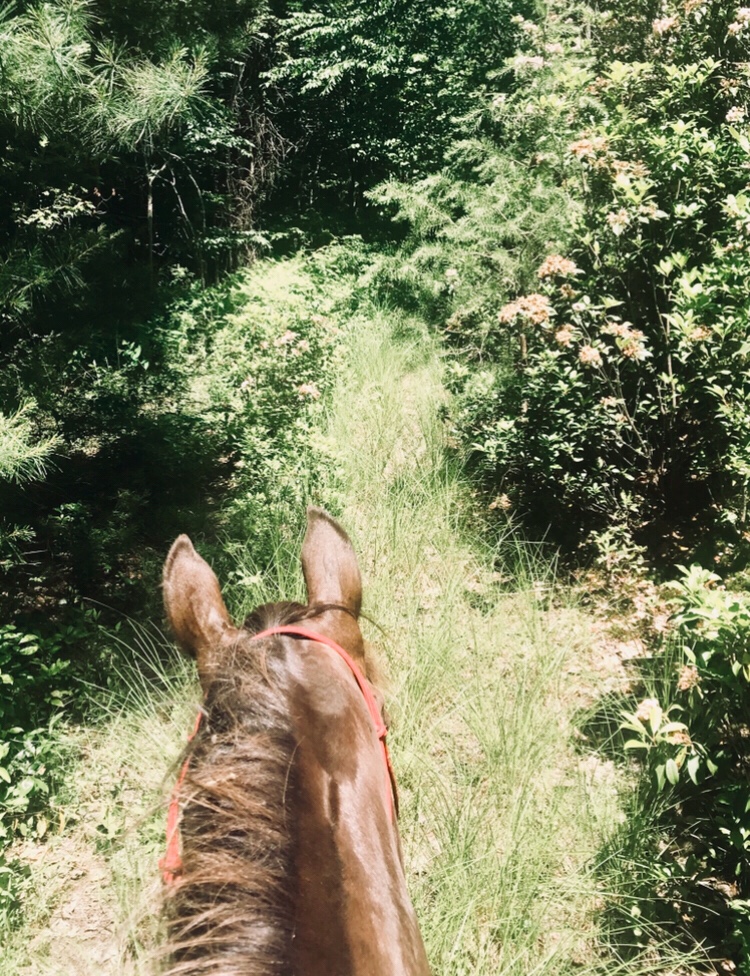 I can fix this!

Then, working in the arena last week, I realized that no matter which way I’m going, no matter if I’m even circling left, she will always do a right lead canter. Period. I spent at least 20 minutes with a friend watching to help me know if anything I did got a Left lead so I could immediately stop and let her process.

Maybe the fountain was an intervention: this is not going to be a one day fix.

But I understand. I want to restore the thing I broke in ignorance. I’m ready to get it right now. Why wait? Let’s keep working that weak side until it’s the strong side!

When I got home I checked her back and realized that she had a sensitive spot. It’s not the saddle. It’s me. In fact I had a slightly sore spot in exactly the same place as she does.

Granted this saddle doesn’t allow much forgiveness, and it comes with a pretty strong disclaimer- that it’s a constructive saddle and if the rider is committed to being a BALANCED rider it will be comfortable for the horse and enable the horse to build a strong topline. I’ve seen evidence of this- but my imbalances are only made more of an issue as the saddle doesn’t protect the horse from me so to speak – in the way most othernsaddles do.

This is also a good reminder to me that though I love this saddle and I do believe it is one of the best out there for creating a strong topline and allowing the horse the best movement and comfort- and I’m committed to the saddle and the process of becoming the best rider I can me… it comes with a caveat: the rider MUST always be on guard to stay balanced. Due to injuries, or even for those who don’t have the interest to get so serious about this in everyday life- the very saddle that is an amazing gift for one horse could also be a terrible curse for another. It isn’t for everyone. I’m putting a very concerted effort and am in decent physical shape with good balance overall and I’m still struggling at times!

Ironically the soreness has been developing gradually (and it’s very minor right now) as I’ve been trying to work on the weakness. When I was less aware of the imbalance I had less issues (although over years that would cause a lot of long term issues in her body!)

Growth and building up weakness can be a hard process.

It was past time however to get serious about support- and in this case I needed to add a 1/4″ felt shim to the pad.

I’ve been avoiding doing it because I wasn’t sure WHICH SIDE to put it. It’s not that obvious- and doing it wrong might make things worse which I wasn’t in a hurry to do. But when I took the time to think it through and looked at all the parts- I think I figured it out, and when I saddled her the next time with the shim in the pad she seemed to lick and chew and relax as if to let me know that it was an improvement.

It felt dramatically different to me- but after the long ride I took I noticed some improvement already. I did give her a bute that afternoon in case it would help with inflammation and a couple days later I checked and her sensitivity was even less. [and editing the blog today a few days later, it’s not there at all]

When I went to ride with a friend we talked over the process and in close inspection she saw the right side where I added the shim was even still a slight bit lower than the left. I probably should have slowed down to think this through a month ago.

It reminded me that everything takes time.

I’m often in a hurry to move forward- for the best reasons. My heart is in the right place, but timing is beyond my control.

I still want to get that left lead canter, but I’ll remember to give it time and work on it more gradually. I realize that going to fast to try to fix this will only cause more damage.

I want to even out our balance (mine and hers) but I’m also reminded of a concept I heard this year that’s intrigued me: Sometimes when you’re out of balance you need to find a way to weaken the strong side, not only to strengthen the weak side.

Without incurring injury, I’m not quite sure how this works- I’ve never tried to intentionally weaken something. Maybe that’s the key here… and maybe it’s a concept I’ve not paid enough attention to.

Doubtless these insights apply to the way I function in the human world too. It always seems to be that way for me- few things I’ve learned that help me with my horse don’t translate at least in some way to ways I could handle the world around me better. 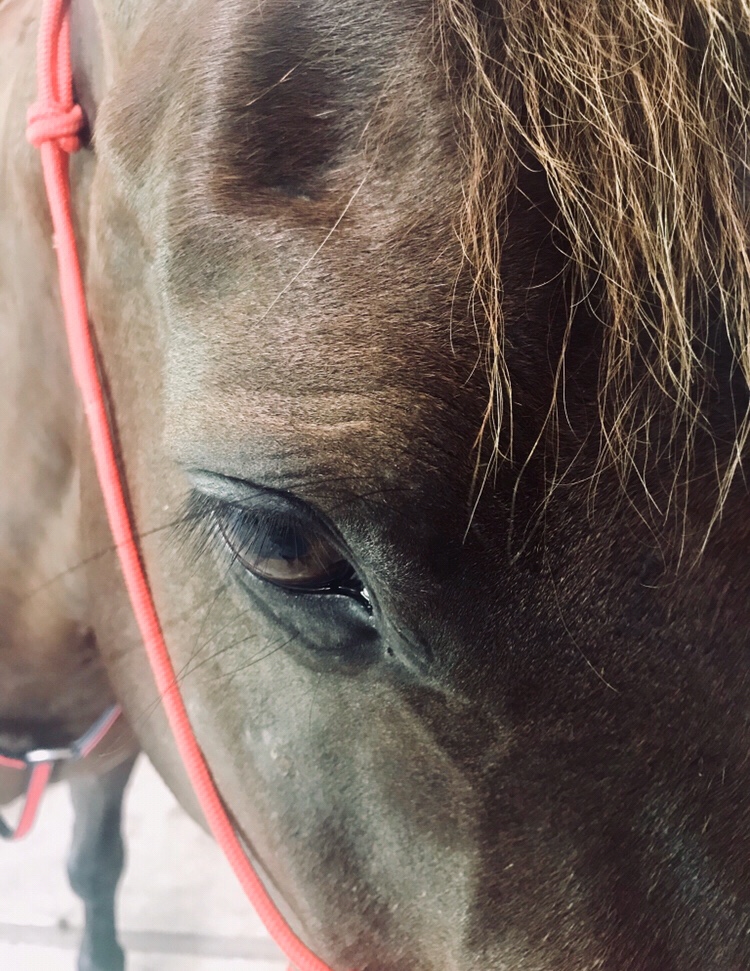