Home from the last ride of 2018 I’m pleased and a little surprised to say we had a fantastic day. Better than expected and truly better than I deserved. 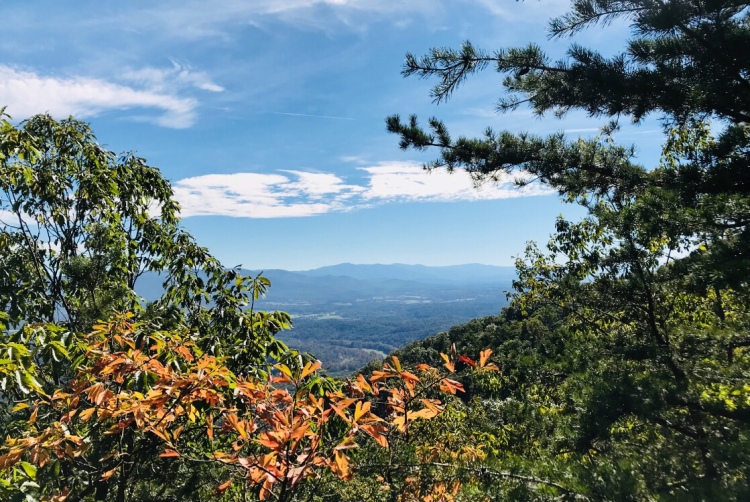 The abrupt drop in temps made for a great morning for Khaleesi who has a full on winter fuzz coat that I refused to clip this year.

As I wrote in my last entry- and it continued until the morning I was loading up- I flip flopped daily on going to the ride or not.

Arriving at base camp with left hind scratches that were flared up again which meant a horse that was avoiding me and kicking at me as I continued to treat them; also a larger bare patch from the rain rot spot near the wither under the saddle — I wasn’t certain we would even pass the pre-ride vet. 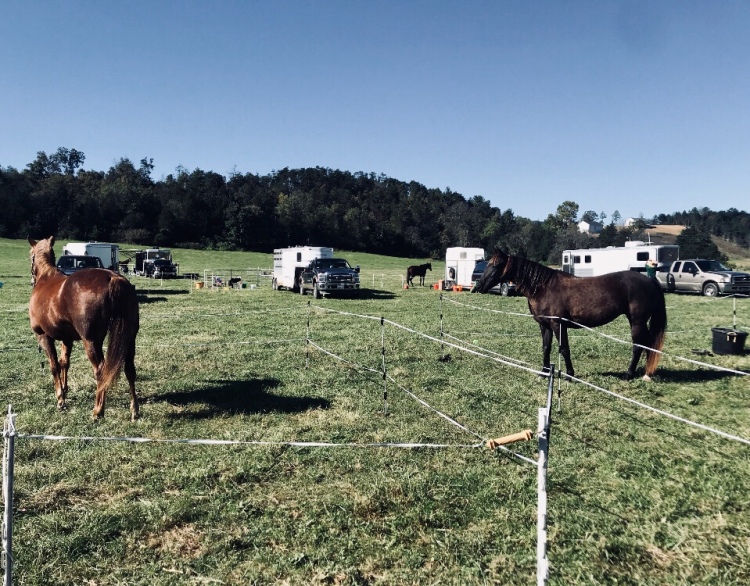 One of the friends I’d been helping out this season get started in endurance riding had come to do her first 30 mile as well. Maybe in the end this ride was about her and I could crew and cheer her on.

Maybe it’s an opportunity for me to take the back seat and enjoy someone else’s success?

I’m ok with that… I have my completion for this season to stay on track for a decade team… I don’t have to ride this one.

But we passed the vet-in with a flying trot out (she does get excited sometimes) and flying colors on our vet card.

One step at a time I just kept on toward the ride half expecting each one to fail.

As I prepped the night before I still had doubts. I laid in my hammock as the temps dropped into the 30s (thanks Noel T for the heater!!) I was certain I’d go to put the rear boots on and she’d be lame from the painful scabs where the boot sits on the back of the foot.

But in the morning the previously inflamed warm scabs were not warm to the touch and she seemed ok with the boot.

She looked at me obviously annoyed as I went to saddle her:

I don’t think she wants to run today

I told her it’s just her job so let’s give it our best. She knew what was coming- it’s always a long day when we go to a ride and she works hard… but she is a horse and it is her job. We all have to work sometimes. She doesn’t hate it once we get out there.

In the cold morning I hand walked her a good 10 minutes before even getting on… back and forth to check-in, drop some extra supplies at the crew bag and just wander warming up joints. I got on and she was ready but not hyped up as she sometimes gets with the pre ride energy in camp.

Once trail was open we stayed toward the rear as usual but got right to business and began the immediate 2 miles straight up hill that begins both the first and second loop. I allowed her to trot and walk in intervals and we made our way through the group.

A couple times I wondered if she was ‘off’… was it that back foot?

Maybe I should just turn back right now… what was I thinking. This is a bad idea. Is it just for my ego… to do what I planned… me being inflexible and not listening to my horse?

Yet she evened out and seemed ok. So. One more step at a time we just kept moving.

In fact I was pleased to see her maneuvering through the rocks with no trouble and the ScootBoots were fantastic.

I often allow her to move along the first loop because it’s the coolest part of the day and not having an arab it makes a big difference for us. Her trot ranging through the rocky single track trails was way faster than I’d anticipated but she was asking to go and I said absolutely. On the grassy roads we cantered more than usual as well. Riding mostly alone she was really picking up the trail!

First and second loops head the same basic direction and include a steep climb/drop in and out. The way back to camp includes what I call fondly the trail of tears and it’s steep and rocky after 15 or so miles of hard riding. It’s a challenging ride for sure and we do it twice. 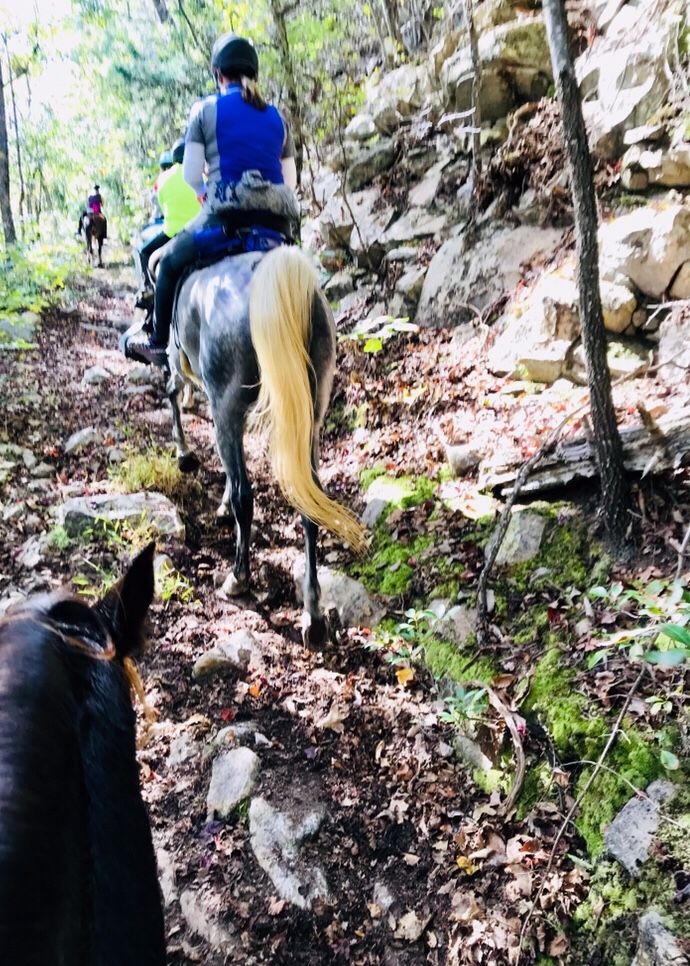 Khaleesi led a group up the mountain and just kept going one step at a time without lag and I was very proud of her.

By the time we returned to the 2 mile steep road now returning to camp at the end of the first 17 mile loop and I jumped off (I jog her down on foot as it’s just a brutal steep gravel road and we can move faster safely if I’m on the ground) I was shocked to find riders usually way ahead of me coming up from behind.

Turns out we were solidly in the middle of the pack.

After trotting into the check and pulsing at 52 before I even had the saddle off, I held my breath knowing Khaleesi often gets questioned on her gait but we got through the vet check without a hitch. Even hydration and gut sounds were As though she hadn’t eaten a thing on the first loop. (She drank often) 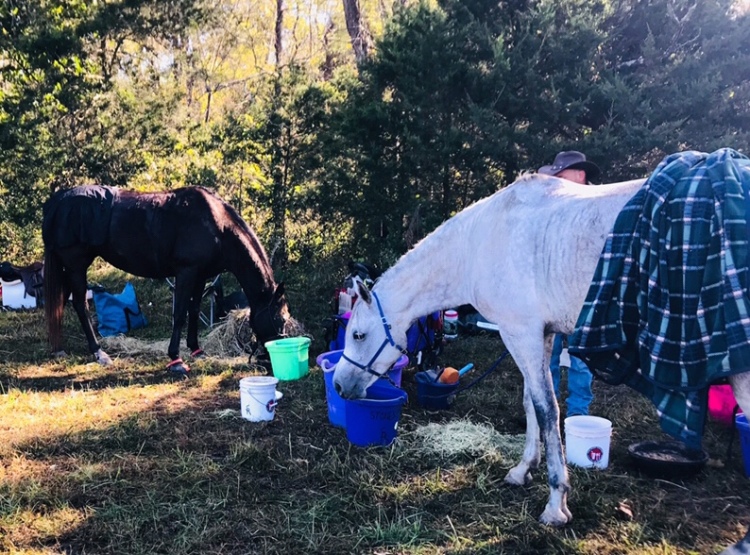 Turns out we’d arrived in 2 minutes behind my friend A so we decided to hit the second loop together.

The second loop went much like the first. This loop has a long out and back along a gravel road and we cantered most of it in a small group of friends. It ended at a pretty stop along the Shenandoah River with lots of grass for a quick snack. 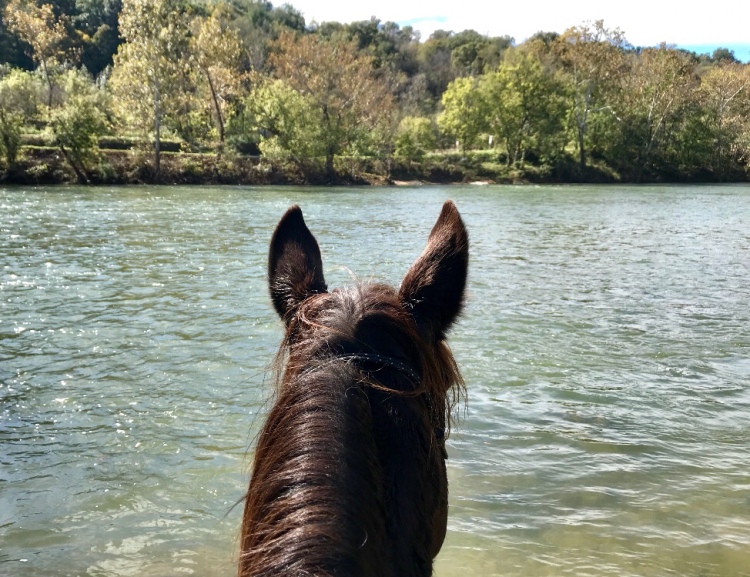 She began to drag on and off as we turned back to camp but I think it was post snack break coma and eventually she picked back up and began to hit her stride.

By the time we returned from the second loop (also hand jogging in the last 2 miles down the road) the temps had climbed into the 60s and it took K a few extra minutes to pulse but still in the 50s in no time and again a great report to head out onto the last loop.

My goal was to finish before dark and it appeared at this point we just might do that.

The last loop is the shortest and doesn’t include the insane 2 mile climb out and the trail of tears climb back to camp but it’s no joke and includes two good hills and comes at the warmest part of the day and after 35 tough miles before.

That 14 miles always feels longer than the 17+ mile loops before!

In the heat of the later afternoon she began to tire. We stopped trotting or cantering the climbs and began walking them. A’s horse was also beginning to lag.

I know my mare always gives me what she can- and I continued to encourage her. There is something about miles 36-45 that always seem hard for them. And without fail as we get closer to 50 an amazing burst comes and as I would tell her how strong and great she is she took on a small hill at the fastest center of the day passing As horse who’d often gotten just ahead enough of us to be out of sight from time to time.

The burst was contagious and As horse raced to catch up and we were off again with more cantering and faster trot speeds again.

I sometimes wonder why I’m compelled to do this crazy sport and mile 45 feeling my horse come back alive underneath me and begin to reach for a new layer of strength is so inspiring there’s not much like it to remind us the true spirit of endurance!

It reminds me to keep going when I feel tired. When I want to say I’ve given enough. Tried hard enough to love someone who is hard to love… don’t want to give anymore… feel like I can’t. Somehow there is always more.

We haven’t come to the point of sweating blood…

The last few miles thankfully were mostly pasture fields and the mares continued leap frogging for the lead and we all encouraged each other on.

We raced off to the finish line hollering like a pack of coyotes. It was fitting that we came in 12th to As 11th – her horse had truly inspired K to keep up a better pace than we would have alone. 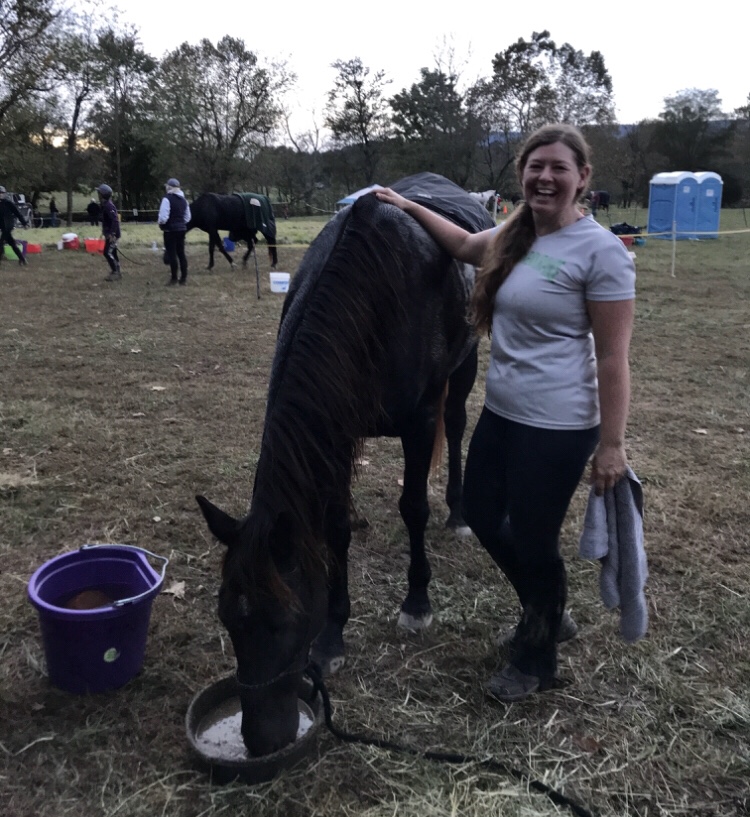 With a ride time of 9 hours and 2 minutes it might be one of the best rides of our career. Technically our first 55 at the Biltmore in 2016 was faster but that terrain was much easier and not nearly the elevation. Same with the Blackwater ride in 2017- that was under 8 hours which is amazing for us but it was in tidewater and not any hills in sight and no rocks.

Certainly as I mentioned last entry I have not put in the distance or speed this season in training as I’ve been sharing trail with friends who aren’t at that point more than I have in the past. I suppose I feel that her coming to life this ride beyond my expectations is a gift for investing in others. It wasn’t really due to my own amazing conditioning program this year.

Either way I will gladly accept the grace that was extended us for the unexpected strength and speed to share trail with a good friend and her amazing horse! And the gift from them to not leave us behind although as I reminded her often they certainly could have! We are ok alone… but we are better together.

I am also very pleased to say my other friend C and her lovely mare also finished 12th in the 30 mile distance. I’m very proud of her accomplishments as it’s a tough first ride!

I look back to the many many many doubts I had about this ride and learn that though it’s important to listen to the voices of reason when things look not so great… still we can take one step at a time to see how far we can go. And in that way sometimes we get much farther than we’d ever hoped.

Ride the trail in front of you…. that’s all you get sometimes!

2 thoughts on “Better than I deserve”